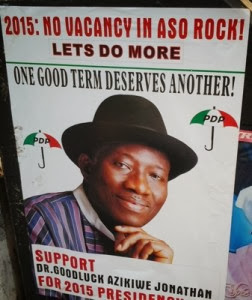 Youths under the aegis of Nasarawa State Youths Network (NASTYNET) yesterday 3rd January, 2014 vowed to support President Goodluck Jonathan beyond 2015 based on the dividends of Democracy on ground in Nasarawa State and quality performance of Mr Labaran Maku and Mr Mark Omeri, the Minster of Information and Director General, National Orientation Agency respectively in the Transformation Agenda Team of Mr President that led to the recent employment of the thousands of youths from Nasarawa State.
In a statement issued in Lafia on Friday by its National President, Ibrahim Kabiru Dallah, The group acknowledged the efforts of government in the area of job creation, through which jobs had been created for some of them.
It said that youths across the three zones in Nasarawa State constituted the major beneficiaries of government programmes.
Subscribe to our newsletter
The group alleged that some top Government official in the state that were not happy with the achievements of the President Jonathan, “wanted to play politics with the recent employment slots distributed to the unemployed youths in the State.”
“The entire Youths of Nasarawa State are thankful to Mr. President for the gesture and to inform him that the employment slots have been duly delivered appropriately through the effort of his trusted minister, Mr Labaran Maku and Mr Mike Omeri, DG NOA. We wish to relay the people’s appreciation to the minister and DG NOA without whose committed effort the employment slots would either not have arrived in the state as was the case with some previous federal officers produced in the state.”

”However, we are fully aware that the transformation agenda is for the benefits of the youths of Nigeria, as such we have no option than to support President Jonathan beyond 2015.”
They expressed their support to Senator Suleiman Asonya Adokwe (Nasarawa South) for his unending supports to the youths and Students of Nasarawa South, especially the yearly distribution of UTME Forms, project works etc, and urged other Senators in the State to emulate Senator Adokwe.
The group also expressed their total support and unalloyed loyalty to Jude Imagwe Mon, the Senior Special Assistant on Youth and Student Matters to President Jonathan.

Nigeria: Of Political Parties And Alliances By Babatunde Rosanwo