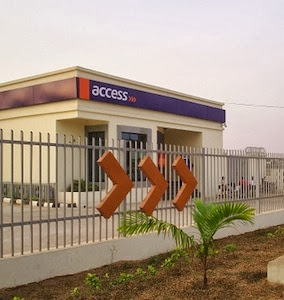 With the anti-corruption pageantry that followed the arrival of the current Central Bank of Nigeria [CBN] Governor, Sanusi Lamido Sanusi to the top seat at the Central Bank, applause and favorable reviews rained on the CBN top boss. His quick action to shut down the operations of five [5] major banks – owing to financial abuse by its owners and directors also received favorable reviews. However documentary information recently made available to 247ureports.com indicates an ‘ugly and ungodly’ corruption and disregard for CBN rules and regulations still abound within the banking system.
Subscribe to our newsletter
Sensitive documents obtained by 247ureports.com reveals the pandemic levels of corruption currently ongoing within the Access Bank. Specifically it reveals the manner the owners and directors of the bank have feasted on the Bank against CBN rules and regulations – to the tune of over N85billion.
The CBN had conducted a “risk based examination of Access Bank PLC As At September 30, 2011” and it revealed Access Bank had granted an illegal loan to three of its majority shareholders in the persons of Mr. Gbenga Oyebode, Dr. Cosmas Maduka and Mr. Tunde Folawiyo. The illegal loan amounted to N38.4billion. This was contained in a letter from the CBN to the Managing Director/CEO of Access Bank dated August 8, 2012 and signed by Oshofodurin A. O. for Director, Banking Supervision Department.
The letter cited Access Bank for contravening Section 20[1] of BOFIA of 1991 and CBN Circular No BSD/9/2004 of 16th July 2004. The CBN penalized Access Bank N3million and ordered the bank to forward a cheque for the sum of N3million to the Director, Banking Supervision Department, Central Bank of Nigeria with one week. It also ordered the Bank to report the imposition of penalties to the Board of Directors of the bank. 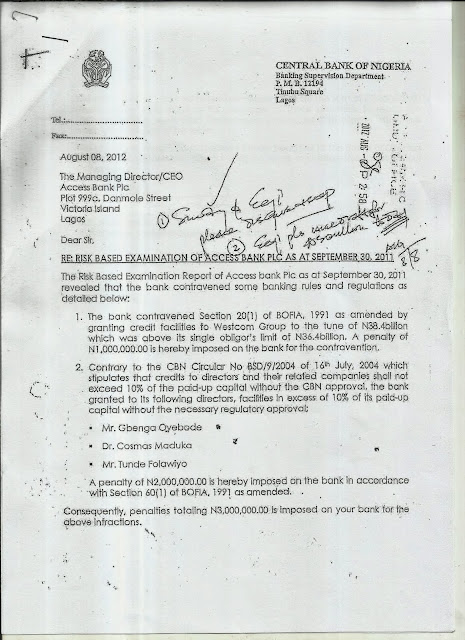 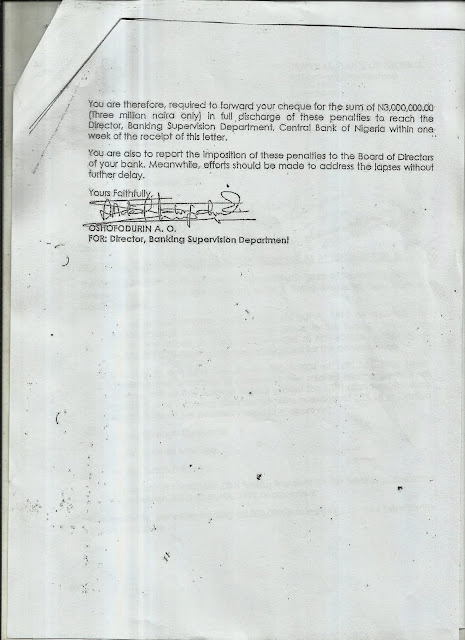 Access Bank was quick to pay the penalty imposed by the CBN. In a response letter from Access Bank to the CBN dated August 9, 2012 and signed by Daniel Patrick [Head, Regulatory Reporting] and Oluseyi Kumapayi [Chief Financial Officer], it stated that a N3milion manager’s cheque with number 00239865 in favor of the CBN – being payment of the penalty for breach of single obligor limit and limit on insider-related credits. The cheque was signed by Benard Ugorji and Sola Afolabi – and dated August 8, 2012. It was received by CBN on August 10, 2012. 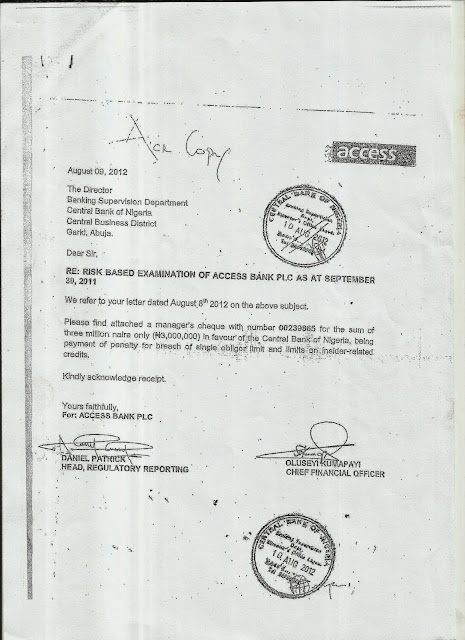 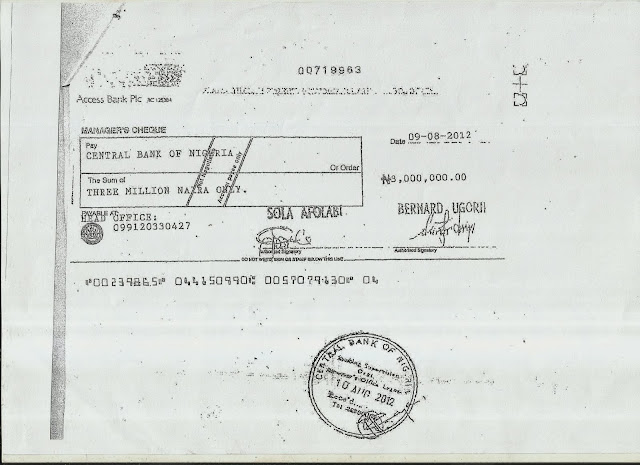 Interestingly, the N3million penalty imposed by the CBN on Access Bank appeared to have not phased the managers and owners of the Bank. This is as it was made public by a pending ‘derivative suit’ letter addressed to the Chairman Board of Directors of Access Bank and to the Governor of CBN – dated January 21, 2013 signed by Ime Nya Asanga [Senior Partner, Ime Asanga & Company] on behalf of Mr. Godfrey Onyeka and Mr. Godfrey Obiamalu – who are minority shareholders of Access Bank of Nigeria.

It reveals a fraudulent credit facility made available by Access Bank to three [3] of its Directors – Dr. Cosmas Maduka through two of his companies namely Cosharis Motors Limited and Sure Comfort Limited, to Mr. Gbenga Oyebode and Tunde Folawiyo. In particular, the letter revealed that Access Bank granted an illicit credit facility to Dr. Cosmas Maduka for $289million [N46billion] through two of his companies.
The letter also revealed that the Board of Directors of Access Bank – following its illegal loan to one its directors [Cosmas Maduka] – opted to hide the illegality through a ploy to commence a “shadow case in the High Court of Justice, Queen’s Bench Division in London”.
The letter reads that “this obnoxious strategy apart from serving selfish interest of the Directors to escape liability and sanction under BOFIA can only serve as another drain pipe to siphon the funds of the Bank in the name of offshore litigation”.
The letter requested the Board of Directors to refund the $289milliom illegal credit given to Dr. Cosmas Maduka. 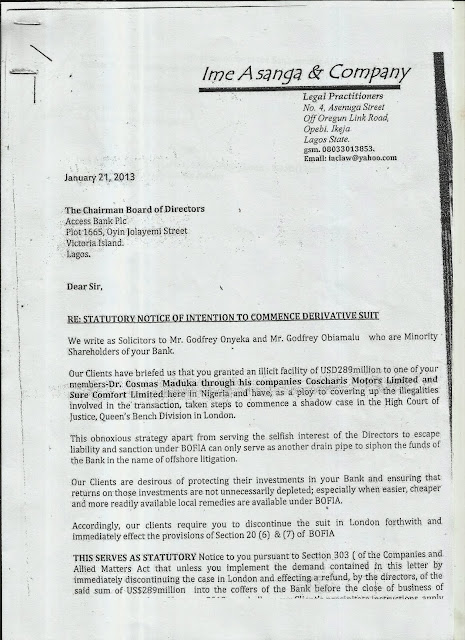 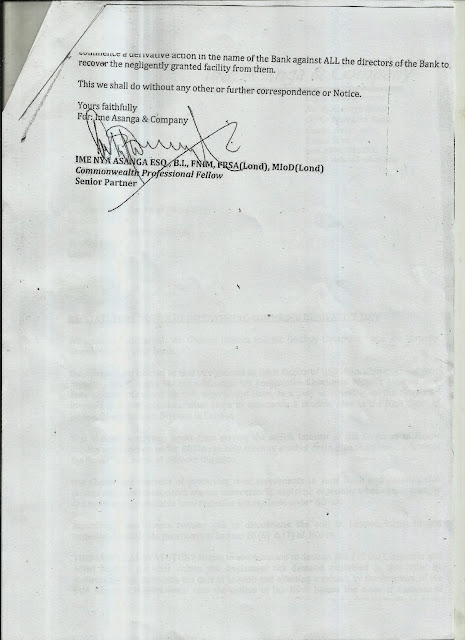 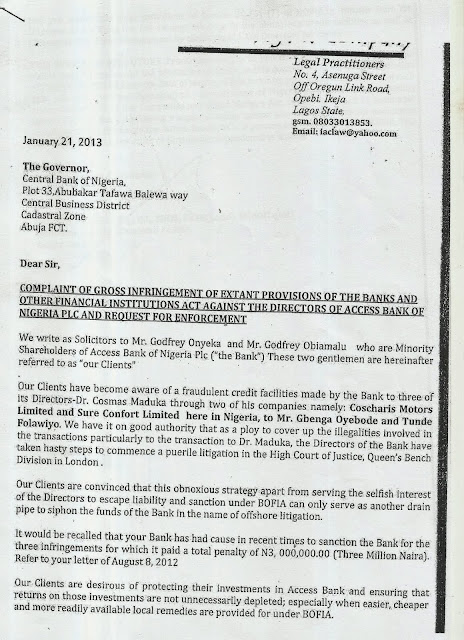 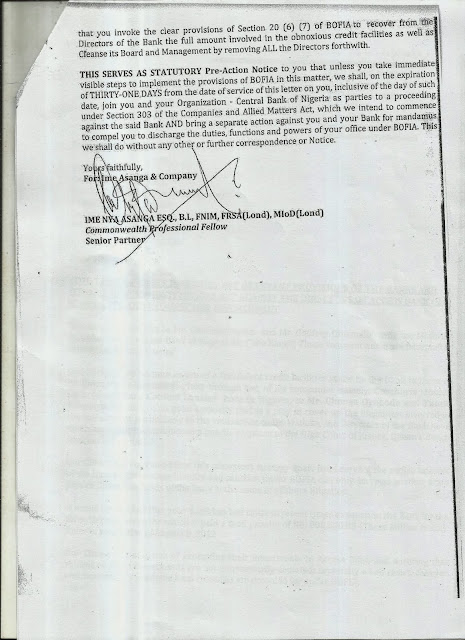