My Defeat In Ekiti Not Due To Stomach Infrastructure – Fayemi 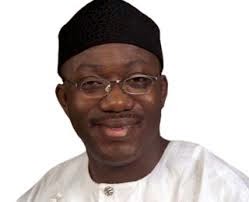 Ekiti state governor, Dr. Kayode Fayemi has debunked insinuations that he lost the 21 June governorship election because of what analysts have called ‘stomach infrastructure’, saying the insinuations are the handiwork of people he described as “arm chair analysts.”
The governor made the assertion at the 70th birthday lecture and book presentation in honour of Professor Olatunji Dare in Lagos.
“Forget about what you read in the papers, it is not stomach infrastructure,” he said in a veiled reference to the outcome of the Ekiti state governorship polls.
Subscribe to our newsletter
While announcing his launch of the book, Fayemi explained that he decided to attend the event himself and purchase copies of the book because “maybe it will redeem my image of what people say we are. Forget what you read from the arm chair analysts, there is nothing called stomach infrastructure in Ekiti. That story will be told another day, not for this occasion.”
He also noted that he did not come to the function with a retinue of policemen and personal aides because of his belief as an intellectual in the public space.
“So when the chairman [General T.Y Danjuma] said I came in quietly and sat down, what else was I supposed to do? To create distraction by walking in with gun-toting policemen, with sirens blaring and all the goons disturbing the peace of the hall? That way, I will be the people’s governor.

“I do worry about that because the lecture we just had and the festschrift talks about public intellectuals and the place of public intellectuals in public sphere.”
It is, however, not clear if the governor never used sirens or never had a retinue of aides following him about at functions in the past.
The governor also said he experiments this principle by documenting his experiences in governance since assuming office in Ekiti State.
“As someone who, at the turn of every year that I have been in office, I have cause to write a book about my experience in government and the challenges of governance, that is why I regard Professor Dare as one of the very best in the industry. And that is why I’m here. That’s my first public event since June 21st (the day of the Ekiti election).”
He said he will continue with the task of finding answers to problems of the society. “We want to go on with our sociological challenges with the way the people are governed. I consider it a duty on my part to pay homage to someone who has taught us the importance of public intellectuals in the development and deepening of democracy.
“That is why I didn’t want to send someone here. Though my Commissioner for Information is here, I prefer to be here myself. I will like to buy some copies, maybe it will redeem my image of what people say we are in Ekiti.”
Source: PM NEWS