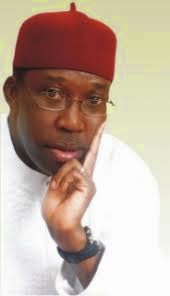 Following our report on how Sunny Okonye, a hotelier who was allegedly shot by Senator Ifeanyi Okowa’s killer squad made a sudden u-turn that he lied against the Senator, many impeccable sources have confided in our correspondent that he made the reversal following an offer of N15 million bribe made to him.
According to various sources who spoke with us after reading our report, they stated that Sunny first statement of being shot by Okowa squad was the truth, but the only lie he told was involving the Senator’s personal assistant, Hilary who was not at the venue of the incident.
We gathered from authoritative source that the murder story have been having a negative effect on Okowa campaign, prompting a negotiation with Sunny to retract his earlier stand with millions of Naira which will see him relocating to Ghana after the U-Turn confession. Speaking to our reporter, a source said; “You are a Journalist and can verify from him why he is making this story after a month. The truth is that Okowa has bribed him with cash to smear the name of the Ika South Council boss, Eng.r Andrew Obiazi and Cairo Ojougboh. I can tell you that N15 million was given to that guy to play this script.
Subscribe to our newsletter
Investigations carried us by us revealed that the campaign team of the Senator has been jittery over the alleged near murder scandal and arranged the press briefing fo Sunny to make the U-Turn statement after which he is expected to travel to Ghana to meet his family whom he has relocated.

Further fact findings by us unveiled the fact that Sunny’s elder brother, Chidi Okonye is a special aide to the Senator and has been mounting pressure on his younger brother to turn the story around and clear his boss of the mess which is already denting his gubernatorial ambition.
In a bid to gain more media publicity, the Okowa media team recruited Delta Independent reporter to report the denial of Sunny Okonye story which was published on Tuesday. A text message with the title ‘VINDICATION’ has been flying round on phone numbers of Nigerians telling them to pick a copy of the paper to read.
Calls placed to Sunny phone to confirm our new findings were not picked.