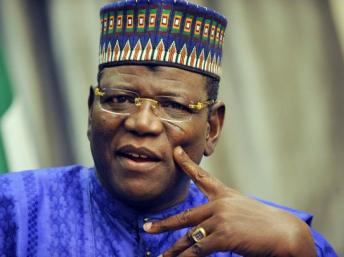 Governor Sule Lamido of Jigawa State may be gradually losing  the control of his political home front as the state chapter of the party is been plunged into serious crisis with the state party Secretary, Alhaji Ali Gantsa who also called Sule Lamido government, ‘ the most corrupt one’.
As gathered by universalreporters the crisis which comes at the heel of PDP Governors Forum meeting which hosted by Governor Sule Lamido, was triggered following a disagreement between Ali Gantsa the party State Secretary and a former State House of Assembly member, Sani Magaji Kangiri.
The duo, who nearly engages in fisticuffs as the PDP governor’s forum meeting was going on, also attracted the attention of several people including the journalist who tried to separate them so as not to cause panic or disrupt the meeting.
However, Ali Gantsa who was seen pushing the former honorable member in a bid to blow him in his face was overheard shouting, ‘ is it because this government of Lamido is so corrupt, which allows every nonentity to be, that you think you can confront me?
However, when contacted the State Chairman of the PDP denied that Gantsa had called Lamido corrupt government but he admitted that there was the battle.
He further described what happened as a family affair which would certainly be resolve, however, many guests who were present when the fighting was going one, were surprise that if a State party Secretary will calling  his government a ‘ corrupt one’, then it is a serious matter.
When contacted for his comment on phone, the Secretary Ali Gantsa shouted at our reporter, saying, ‘every bastard can write whatever he feels he can write’.