Many of the houses ended in the hands of non-natives, who were given either fake or original occupancy documents for huge sums.
“It is a shame that what was supposed to be a good intention of the government has been so manipulated and frustrated by FCDA officials for selfish reasons,” one community man, Joseph Tella-Shinkpa, said.
“The allocation of house and plots was long decided by government. What was left was for the FCDA to ask indigenes to come forward with either their national identity cards, driver’s licenses or international passports for verification and collection of their allocations. But where directors in the FCDA were allowed to issue letters recommending people to collect the plots on behalf of other people was most likely going to result in the current crisis.”
A civil/structural engineer, Mr. Tella-Shinkpa’s father, Josiah Shekwoho, was among the beneficiaries of about 1,473 plots and 849 houses allocated by government to indigenes of the three communities under the Apo Resettlement Scheme in 2009.
Mr. Shekwoho’s allocation papers indicated he was given House No. 155 Zone B with Enumeration No. GK/05/1255. However, when the keys for a new set of houses in the area were handed, his name, like several others, was missing on the list.
Mr. Tella-Shinkpa and family members have pressed on with the case to date, to no avail.
The scams, oftentimes, are pulled in connivance with crooked community representatives, PREMIUM TIMES probe shows. Indigenes privy to the allocation procedures repeatedly pick more plots and houses than they were entitled to, and secure houses and plots on behalf of the kinsmen but refuse to hand them over.
For instance, Awyetu Ngbako, according to the committee, was in November 2009 allocated a one-bedroom bungalow, House No. 09, in Zone A, with Enumeration No. GK/05/2301 in the official check-in list presented to the Data Verification Committee.
The title soon became the subject of a dispute between Mr. Ngbako and the District head of Garki community, Dangama Magaji. While the conflict was yet unsolved, Mr. Ngbako’s wife, Cetawomilon, showed up with claims that the disputed title was hers.
When the Department of Resettlement & Compensation checked through, the title was confirmed as Mr. Magaji’s.
For the community members, the mix-up was deliberate as it tied with Mr. Ngbako’s past. A journalist and a native, Mr. Ngbako has worked for years closely as a representative, with the government, and left trails of shady property deals in connivance with the government officials. To community leaders, he deliberately replaced, through the officials, the owner of the property with his wife.
When petitions to both the Sa-Peyi of Garki and officials of the Department of Resettlement & Compensation failed to resolve the conflict, Mr. Ngbako proceeded to court for redress.
A touchy case with potential of tearing through the uncanny details government officials struggle to keep, the matter was handled with immense caution. In the end, authorities urged him to withdraw the case, in return for a new allocation.
In another case, John Dara, a well-known figure in the area, but apparently a non-indigene by name, got House 119, Zone B, a 3-bedroom bungalow, with Enumeration No. GK/05/1585 issued by the same FCDA department.
When the community sought explanations from the FCDA, Mr. Dara presented to the ministerial committee a reference letter purportedly issued by the local chief, the Sa-Peyi of Garki, Usman Nga Kupi.
The community chiefs and representatives of the Sa-Peyi have since declared the letter a forgery. He still occupies the house.
More Intrigues
While the government report refused to be categorical about the ownership of the contentious plots, community representatives who have followed the case for years listed samples of plots cornered by the dubious government officials.
Some include Plots 847, 848, 849, 1260,1261,1262,1263,1264,1265,1266 (Commercial) in Zone C and Plots 774,775,776,777 and 788/789 (Residential).
Similarly, Plots 1547,1548,1550,1549,1551,1565,1566 and 1567 in Zone E of the community and Plot 237 in Zone A, which have been developed into private estates, are said to belong to some officials in the Department of Resettlement and Compensation in the FCDA.
Ascertaining the true ownership of those plots and others was the request in PREMIUM TIMES’ FOI letters.
When the applications were first filed requesting the particulars of the owners of those plots, AGIS and the office of the Minister of State assured of prompt responses. None ever came despite repeated reminders.
Mrs. Akinjide, who authorized the investigation and personally handed its outcome to President Jonathan, later told PREMIUM TIMES in a telephone interview she was unaware of the requests. The minister, who refused to give a formal response to the violations stated in the report, however asked her personal assistant on Resettlement and Compensation, Ben Ogenyi, to contact PREMIUM TIMES with the information that the issues under reference did not happen during her tenure.
At the centre of the accusations of illegal ownership of plots and houses in the resettlement are the director of the department, Mr. Okechukwu, his deputy, Helen Obiechina, and Mrs. Obiechina’s personal assistant, Augustine Udeh.
More than any other staff, residents who spoke to PREMIUM TIMES heaped their anger on the trio, with an established list of plots said to be theirs at various locations at the resettlement site, including an area they derisively refer to as “millionaire quarters”, where the most exotic of buildings are found. Mr. Okechukwu denied the allegations and asked for evidence.
“Let them bring the evidence. It’s not just allegations when they are the ones who got the properties and sold them out,” he told PREMIUM TIMES in a telephone interview.
But, angry residents ask how such evidences could be shown when the FCDA has consistently refused to publish the full data on ownerships of the plots and houses at the site.
“FCDA officials are to blame for the abuses in resettlement the process. Most of the plots were allocated to staff of the FCDA, instead of the indigenes,” Danjuma Tanko, one of the community representatives, said. 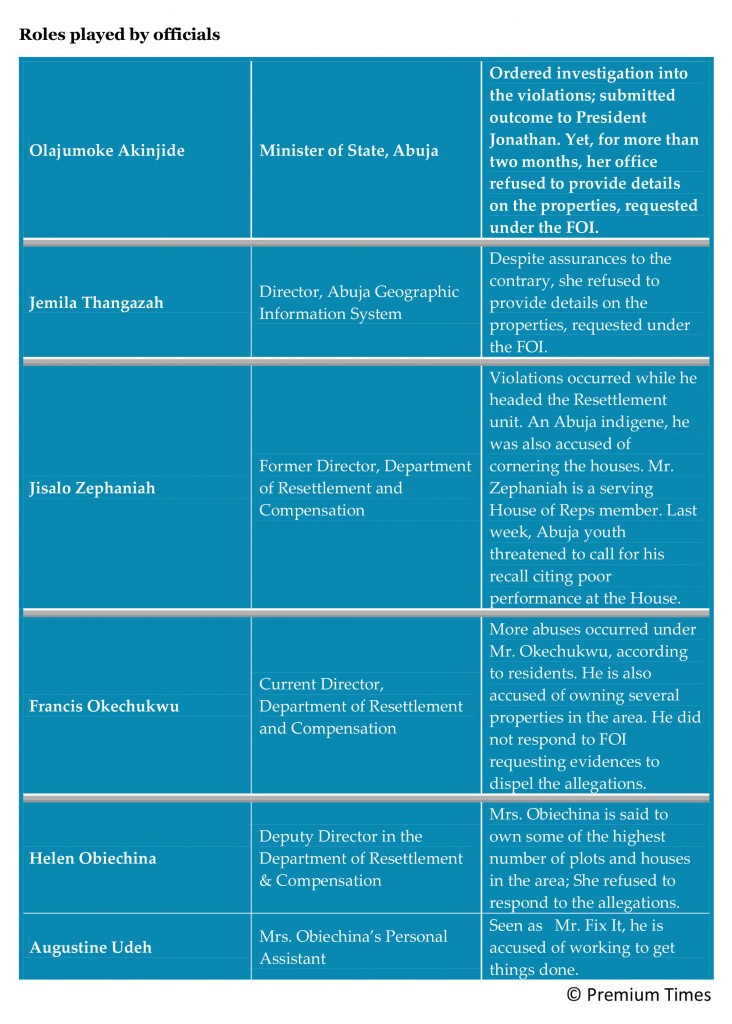 Besides not responding to PREMIUM TIMES‘ letters, Mrs. Obiechina also did not provide answers when reached on telephone. After complaining about her discomfort with telephone interviews, she also declined a physical meeting in her office or at PREMIUM TIMES’ office.
Her assistant, Mr. Udeh, a man many community members view as a sort of “Mr. Fix It’, with widespread clout and titles to several plots and houses, also refused to answer questions. A soft-spoken man, he cited civil service rules, saying he could only answer to questions if routed through his boss.
Matters between the community and the staffers boiled over during one visit by the ministerial committee during the investigation that they narrowly escaped being lynched.
But the controversy has continued. While the allocations remain controversial, the apparently poorly-built houses, PREMIUM TIMES found during visits, are fast depreciating with the walls caving in, sewages collapsing and some areas defaced, just few years after they were erected.
“Before the houses were allocated in 2009, they were falling already,” Mr. Gbaiza said.