I Will Reply Atiku In My Book – Obasanjo 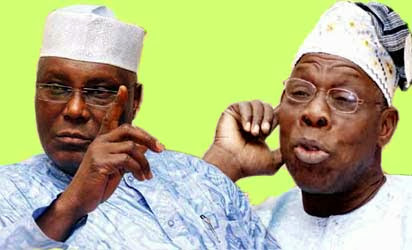 Former President Olusegun Obasanjo on Saturday said he would respond to the claims made by his erstwhile deputy, former Vice-President Atiku Abubakar, on their political relationship, in his soon-to-be published book.
Subscribe to our newsletter
Abubakar had, in an interview published in Hausa language by a newspaper, disclosed that he “blasted” Obasanjo over his bid to run for a second term and had argued vehemently with him on his (Obasanjo’s) bid to go for a third term.
He also claimed he snubbed Obasanjo, who had visited his residence to plead for his support for a second term. He disclosed that Obasanjo gave him a Quran to swear as a pledge of his loyalty to him, during one of their arguments.
When contacted for Obasanjo’s response to Abubakar’s claims, the former President’s media aide, Mr. Vitalis Ortese, simply told one of our correspondents, “Wait for our book.”

Also, Obasanjo’s Chief of Staff, Mr. Victor Durodola, said the former President did not want to respond to the things Atiku said in the interview.
“There is nothing to respond to. What was published was taken out of context, from an interview. He (Atiku) did not come to say it directly, so it is not something we can respond. My principal does not want to respond to it,” he said.
When asked if Atiku’s claims were correct, Durodola said, “There is nothing to correct.”
Source: Punch