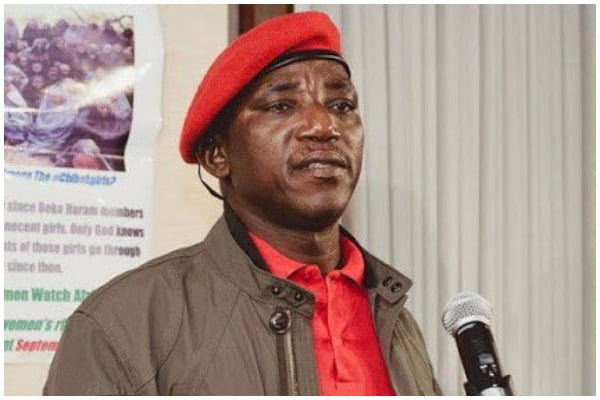 Plateau State Chairman of the All Progressives Congress, Hon Letep Dabang has said the Minister for Youth and Sports Development, Hon Barr. Solomon Dalung was disowned right from his ward to local Government Area of Langtang South LGA where he refused to participate in all the congresses scheduled across the 36 states of Nigeria.

Dabang made this disclosure while briefing Journalists at the APC state Secretariat on Monday,  he told journalists that he feels highly honored and felt indebted to the APC delegates who gave him another mandate to serve them for another four years as the chairman because of the confidence they have on him.

Dabang disclosed that the disqualified candidate, Hon Johnson Podar is free to appeal the outcome of the Congress but the issue here is very clear, in every organization there are governing rules and there are guidelines that are very clear.

According to him, Podar was not entertained there because he is not a member of APC, his ward chairman came to the Congress committee that he has not met up with the committee’s requirements, adding he said those who refused to register and then join the party recently were given list to be members.

Hon Podar Johnson Chairman came to confront him that he never knew him and he didn’t know him as his ward member so this alone has disqualified him, when he alleged to be one of Buhari campaign officers, but that is unfortunate because his name is not on the list of recognized persons on the event as campaign went on.

We can’t give him that automatic qualification when he has not met the party’s guidelines either as a member.

He urged Hon Podar Johnson to go back to his own ward and complete all the necessary registration follow the right way so that he will be recognized the way new members are recognized and asked for inclusion of their names.

Dabang expressed optimism that the party won’t leave them behind, as a party we will organize a conference on how to move forward with all the delegates that affirmed him as the chairman for another four years.

He reiterated the failure of the minister to actively participate in all the congresses scheduled across the states, adding that they chose to embark on wider publicity to educate everyone but Dalung decided to absent himself by going around even when Mr. President participated.

He stated that Dalung’s ward chairman reported that he was enjoying himself since he was appointed minister without visiting his ward party; however, we are yet to receive his letter of complaint here in Jos.

Speaking at the APC state Secretariat on Monday also Johnson Podar decried that Letep Dabang hides the committee in one of the APC offices when he arrives the state chapter secretariat at about 9 am waiting to file his complaint.

He can’t talk to media because as he is here he was so surprised that nobody wants to attend to him or take recognition of his presence.

Meanwhile, political pundits are of the view that there secrets behind the All Progressives Congress, APC, on the Plateau especially with regards to the Minister of Youth and Sports Development on how he was schemed out of political relevant stakeholders that made the list of national delegates election and the huge party betrayal that looms.

The Minister’s Chairmanship candidate Hon Johnson Podar was denied being a member of the APC, adding that he is not a card carrier of the APC to warrant him engage the Governor’s favoured candidate Hon Letep Dabang who was nursing the ambition of the central zone senatorial position ahead of 2019.

However, political pundits are also of the view that the APC chairman who is very strong and highly calculated person in politics which has send signals threat to the current Senator Joshua Dariye who wants to remain relevant politically.

Fresh Crisis In APC As Lawan, Buni Bicker Over 2023 Presidency