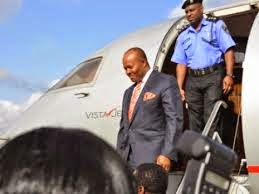 As part of his plans to impose Udom Emmanuel as his successor, Governor Godswill Akpabio has concluded plans to zone the governorship position to Eket Senatorial District in spite of the popular opposition from political stakeholders in the state.
Subscribe to our newsletter
He has caused his stooge, Paul Ekpo, the State Chairman of PDP to call an expanded State PDP Executive Committee Meeting tomorrow 22th April, 2014 in Government House to do the UNPOPULAR ZONING.
Meanwhile, Akpabio left Uyo Sunday 20th April, 2014 for Abuja where he is taking Udom Emmanuel around to introduce to President Jonathan and the National Chairman of PDP, Dr Adamu Muazu. He decided to take Udom to Abuja after meeting with his cabal from Saturday night till Sunday morning to decide on the way forward for Udom.
Present in that meeting were his wife, Unoma, his brothers, Emem Akpabio, Ibanga and Prince, PDP State Chairman, Paul Ekpo as well as Uwem Ita Etuk, Don Etim, Emmanuel Enoidem, Emmanuel Ibiok, Udom Emmanuel, and Nse Ntuen
They decided that consultations for Udom should start immediately.
They decided that Ekpeyong Ntekim should withdraw from the Governorship race and go for Senate.
They decided that the 31 buses bought by the 31 Local Government Councils for the 31 Chapter Chairmen of PDP should be turned to Udom Campaign buses. Some of the buses have already been branded “Udom is Right” Campaign Message, 8 of the buses are parked in the State PDP Chairman, Mr Paul Ekpo’s house
They decided that Nse Ntuen should work with Adasi Obulum, Commissioner for Local Government to deduct the Local Government Funds to fund Udom’s Campaign.
They decided to use every available means to rig the election for Udom.
They changed some Local Government Coordinators of Udom Emmanuel Campaign; they are Saviour Enyiekere – Ika LGA, Eunice Thomas – Ibeno LGA, Bassey Albert – Ibiono LGA and Kennedy Ekong – Itu LGA because of their refusal to support Udom Emmanuel
The question Akwa Ibom people should ask Akpabio and his cabal are:
1. Why are they forcing Udom Emmanuel into the race when he is still serving as SSG of Akwa Ibom State?

2. Was Umana Okon Umana not sacked as SSG for doing the same thing they are forcing Udom to do now?
3. Are what they are doing in line with the Electoral Law?
4. Why are the plotting evil in the Government House which was built with Akwa Ibom money and commissioned when Udom was not around?
5. Why do they want Udom to reap where he did not sow?
6. Why are they diverting buses bought for PDP Chapter Chairmen to Udom Campaign team?
7. How much is Udom’s salary as SSG for him to afford 31 buses for his campaign team?
8. Can he produce the purchase receipt for those buses?
9. Why are they planning to use Local Government money to sponsor Udom when some local government council cannot pay salaries for 5 months?
Akwa Ibom people are closely watching. We know that the Akpabio-Udom boat is a sinking boat heading towards Atlantic Ocean like the Malaysia MT370 Plane.
Akwa Ibom people are prepared to STOP this NONSENSE
Desmond Essien
Uyo, Nigeria

To Governor Nyako and Ambassador Habiba ; Jonathan and Ijaws to Teach Hausa-Fulani Bitter Lessons in 2015 By Obinna Akukwe