Give Me The Governor And I Will Make You A Senator; Jonathan In Swap Deal With Uduaghan By Fejiro Oliver 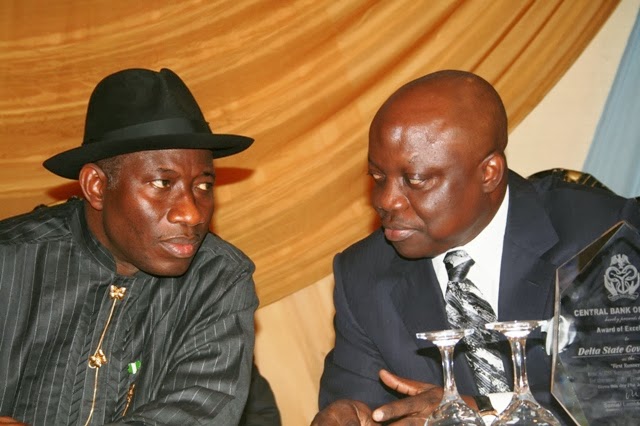 As majority of Deltans root for a Delta North governor or an alternative Delta Central political titan, sources who have the ears of the Nigeria President, Goodluck Jonathan has revealed to us that he has begun moves to impose his Special Adviser on Monitoring and Evaluation, Sylvester Monye on the Peoples Democratic Party (PDP) Delta State.
Subscribe to our newsletter
According to an insider who is aware of Mr President intention, the State governor, Emmanuel Uduaghan has been told jokingly sometimes by the President to go and put the PDP in order for the emergence of Monye, who hails from Onicha–Ugbo in Aniocha North local government area.
The governor we however gathered is not comfortable with the President’s choice but he is currently handicapped as his ambition of being a Senator will be determined by his willingness to play the president’s ball game. Several conversation with other politicians who are aware the development and spoke to Elombah.com further noted that governor Uduaghan has done everything to please the President, hence his reasons for being in almost all functions attended by the governor.

An impeccable source stated that the governor’s initial choice was the Delta State Speaker of the House of Assembly, Hon. Victor Ochei, but was forced to back out when he was shown the over 200 pages of corruption petition written to the Economic and Financial Crimes Commission (EFCC). This prompted him to reverse back to another front liner, who is a member of the G3 in the State, who he has pleaded with President Jonathan to allow him hand over power to.
Sylvester Monye is however quietly consulting and soliciting for support to enable him cruise to the government house. He is noted to always be the major donor in the state wherever any political functions are held, and he is represented.
Source: Elombah