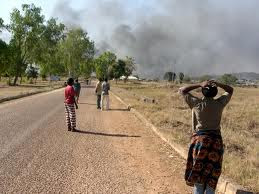 Fresh attack on the Tarok in Kadarko District of Wase Local Government Council leaves three people dead.
A 65 years woman and  two others were among the victims of onslaught in a midnight raid .
Some gangs of sponsored herdsmen suspected to be combined team of Missionaries camp in Lamba Wakkat district last Friday entered Tarok settlement destroyed over 200 houses and Farmland.
The recent uprising in the area was earlier blame on the cattle rustling that led to the death several people and property destroyed.
Subscribe to our newsletter

Jangle stressed that the Emir need to approach the problem in Wase with wisdom and understanding not to listen to bad advice.
Mrs Nanwor Vongkur a resident of the attack village came with some wound of gun shot in her hand and head said, the Fulani came at about 3am .
We heard sporadic gun shots surrounding the entire village with houses set ablaze women and children couldn’t spear the anger assailant.
The spokesman of the STF Capt Salisu Mustapha confirmed the attack but disclosed that he is yet to know the number of casualties.