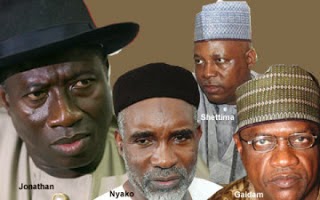 The Security Council Meeting scheduled for Wednesday would consider suspending the governors of Adamawa, Borno and Yobe states, with a view to imposing total emergency rule. This would entail the suspension of all democratic structures in the affected states, should the idea sail through.
Officially, the emergency rule ended at the weekend, but the military authorities have asked President Goodluck Jonathan to extend it, since the war against the insurgency is far from over.
Subscribe to our newsletter
According to a top ranking officer in the military, the security chiefs had indicted some top politicians and elite in the Northeast, for sabotaging the ongoing operations against the insurgents and wanted the governors and Houses of Assembly in the affected states suspended while the operations lasted.
“The politicians and elite, including the governors in those states, are working against our programme; their unguarded utterances are daring the insurgents. They seem to have known the agenda of the insurgents and they are always ready to defend them. For example, whenever these criminals attack, killing innocent people, these politicians would blame us and whenever we are able to locate their hideouts and smoke them out, they would be out accusing us of killing innocent Nigerians. This is why some of us are of the opinion that suspending them while the emergency rule lasts is the best option,” the officer said.
Speaking further, he made reference to Governor Kashim Shettima of Borno and Murtala Nyako of Adamawa and a serving senator, as being part of the alleged sabotage.
“These politicians are making our job difficult, you don’t even know on whose side they are. But from all indications, they are not supporting our operations. One of the governors the other time said the insurgents were better armed than our troops. Just this weekend, I was reading the rubbish Nyako was saying, accusing the military of being responsible for the killings being done by those criminals.
“I don’t blame Governor Nyako for saying all that rubbish. If those governors had been suspended from office, as was the practice during the Obasanjo era; most of the problems we are facing in those states are coming from the governors there. They are contributing more to the problems we are facing.”
A presidency source, who corroborated our military source, explained further that the Security Council would consider all options available before taking a decision.
“It is true some are calling for the suspension of the governors and the Houses of Assembly in the three states, but that is not the only option or suggestion, we still have others. For example, some are calling for the full implementation of the Anti-Terrorism Act and if that is accepted, the democratic structures remain. If I may let you know, President Jonathan wants them be (sic). The problem is some of their activities that are not helping the counter-insurgent operations and I think we could still manage it.”

He said, “To suspend these people may not be a way out, because if they could be working at cross purposes while they are still in office, you can imagine the havoc they could do while on suspension. But the ideal thing is for the counter-insurgent operation to be done with full co-operation of all the stakeholders, irrespective of their political and religious persuasions.”
Another military officer accused Senator Ahmed Zannah from Borno State of sabotaging the operation and said there were some incidents the security operatives may need to clarify from him.
“Senator Zannah often comes to the Defence Headquarters and each time he comes, the aftermath is always with one controversy or the other. But our people in his home state are waiting for him to explain some coincidences that have to do with him.
“Two, each time he surfaces in Borno State, that is when the activities of the insurgents are heightened. Three, he seems to know more of the insurgents than we do. For example, he knows that some of their locations we said we have attacked are still intact. Four, why does his speech always betray him as somebody working for the insurgents and why has he never seen anything good in what we are doing?”
When asked why those questions could not be raised when he goes to the DHQ, the source said, “For expediency and tactical reasons. It is in his home state that our people need him, not here. Although we are told he said he has no problem with us, but with the Presidency. But his utterances and actions are not helping us.”
When the Defence spokesman was asked to confirm or deny the allegation, he said, “We are not interested in engaging Senator Zannah in a media war.”
But a top officer at the Defence Headquarters added another dimension to the discourse when he faulted the expiry date of the emergency rule. According to this serving general, who asked for anonymity since he had no right to speak for the DHQ, the emergency rule continues until May.
“I have been reading it from the papers that the emergency rule ended today (last Saturday). That cannot be true. The first broadcast of the commander-in-chief, President [Goodluck] Jonathan was made on May 14, 2013 and the first six months of the emergency rule ended in November and if another six months began in November, that should tell you it would not end until May. So, where are the media getting this 19th April date? I suspect the so-called stakeholders from Yobe and Borno, who were calling for an end to the emergency rule. Go and do your work very well. If the emergency would not be extended, it is when the ongoing ends in May.”
Source: Leadershp