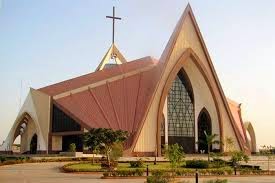 Igbo Bishops and pastors have advocated Prayer Haram as a means of tackling the rising rate of Boko Haram attacks in Nigeria. Speaking during the State Coordinators Executive session of General Association of all Igbo Christian Organizations and Ministers (GAAICOM)  which held last Monday at Enugu, the  Abia State coordinator, Bishop Isaac Eze advocated the use of ‘Prayer Haram’ as means of tackling the insurgency. According to Bishop Eze ‘’ this battle has surpassed the government. The explosion on Nyanya Bridge and numerous others has shown that government is overwhelmed already and it is time for God to be solicited for solution. I advocate the use of Prayer Haram, which is warfare prayers targeted at the demons using Boko Haram members to perpetrate evil” Bishop Eze reiterated that” if Christians will stand in the place of prayer, and confront the evil spirit behind Boko Haram, the God of Heaven will hear and drive the demons away”.
In his own reaction, Bishop John Ugah, President of Ebonyi State Indigenous Ministers Association asked believers to “seek the face of God so that our sons and daughters will not be sacrificed by agents of Boko Haram. God is able to turn the situation around with the use of prayers as instruments of warfare since government have abdicated in the face of serious confrontations”.
The Director of Media and Communications of GAAICOM, Rev Obinna Akukwe had earlier briefed the Bishops and Pastors during the  ‘State of Igbo Nation Address’ on the failure of Igbo elites to attract critical infrastructure to South East despite holding key political offices. He informed the clerics that the late Ohanaeze President of Kano, Tobias Idika , was poisoned by agents of Boko Haram to silence the voice of Igbo activism. Rev Akukwe asked the cleric to mobilize the people to take their destiny into their hands to ensure that a president of Igbo extraction is elected at the soonest possible time.
Rev Nwitte, a university don and lecturer at University of Theology, Ebonyi in his reaction said that “only targeted liberation prayers will destroy the grip of these insurgents and destroy the evil spirits behind their activities and the earlier we do that the better” According to Rev Nwitte if the church do not act fast in liberation prayers, this wickedness will spread all over the nation.
Apostle Charles Louis Egbuchiem asked the officials to seriously prepare for the proposed ‘3 day walk into the presence of God ‘ scheduled  for November 2014 where all Igbo will seek God’s face for three days so that they will reclaim lost glory.
The General Coordinator, Apostle Dr PCJ Macjossy asked the participants to carry the prayer message to their churches and ensure that terrorism in the land is prayed off. He said that prayer works wonders and that God answers to prayers of faith.
In another development, the immediate past president of Pentecostal Fellowship of Nigeria,(PFN) Enugu State, Bishop Obi Onubogu had described the recent spate of bomb attacks as a blackmail against the federal government. Bishop Onubogu called for ‘extra vigilance and more prayers to expose the initiators and sponsors of Boko Haram” According to Bishop Onubogu, the church must rise up and face this monster with courage until the enemy retreats’.