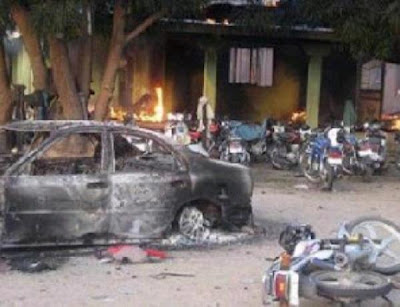 The Sabon Gari area of Kano metropolis was yesterday rocked by multiple bomb blasts which occurred at Igbo Road/Enugu Road and on New Road, opposite Ado Bayero Square.
The development was said to have sent panic-gripped residents running helter-skelter in the ensuing confusion, witnesses around both scenes told LEADERSHIP via telephone last night.
Subscribe to our newsletter
Security agencies confirmed the incident but said they were still gathering details at the time of filing this report, however, a witness claimed that about 25 people died during the attack by unknown gunmen, and there was report of ongoing sporadic gunshots at press time.
Security forces were said to have immediately cordoned off both scenes of the attacks which prevented people from moving close to the places hit by the explosions.
Reports said one of the blasts was on New Road not far from St. Stephen’s Anglican Church, a situation that made many believe that the church might have been the target.
The first blast occurred at about 9:12pm along Enugu/Igbo Road near International Hotel, while the second blast followed three minutes later.
Subsequent blasts followed shortly after the security personnel arrived at the scene.
Residents of the areas, including fun-seekers, were seen fleeing in different direction, and children were said to be among the victims.
The spokesman of the Joint Task Force (JTF), Captain Ikedichi Iweh, confirmed the incident but refused to give details. He, however, told residents to remain calm.
Heavily armed security operatives had cordoned off the area by the time of filing this report. Though there were rumours of deaths, witnesses claimed that so many people were wounded.
The presiding pastor of Peniel Baptist Church in Sabon Gari, Rev. John Adeyemo, who lives close the New Road blast scene, told LEADERSHIP on telephone that the ensuing confusion and uncertainty, coupled with the security force’s take-over of the sites, made it impossible for anybody to pin-point the actual targets and the exact number of casualties.
6 died during attack –Police

However, the Kano State Commissioner of Police Mr. Musa Daura, who confirmed the incident, claimed that only six persons were killed during the blasts, while six others were injured.
According to him, the security forces immediately cordoned off both scenes which prevented people to move close to the scenes of the explosions.
Eye witness account
An eye witness and secretary of Ohaneze Ndigbo in Kano, Mr Tobias, said he counted no fewer than 23 dead bodies, including a beer parlour owner who is of Calabar origin. He added that a bomb had previously gone off at the same place during the heat of the insurgency.
Our reporter who was at the scene overheard an injured middle-aged man shouting, “Somebody help me!” but he was not getting immediate help because of the confusion.
LEADERSHIP saw the police carrying away the dead body of a little girl who could not be more than 10 years.
At the state-owned Murtala Mohammed Specialists Hospital, Kano, where the dead were deposited at the mortuary and the wounded were receiving treatment at the emergency unit, our reporter heard a boy crying out in anguish, saying: “Look at my brother David dying.”
The seven-year-old David was lying in a pool of his blood.
A mortuary attendant at the hospital said at least 26 bodies had been brought in from the scene. He spoke on condition of anonymity because he was not authorised to speak to reporters.
“About 16 bodies were brought in by the police and 10 more were brought by the some residents and police in a white Hilux bus after about 3 hours,” he told our reporter.
Source: Leadership

EXCLUSIVE: Re: Findings Of NUJ’s 3-Man Committee On Allegation Of Extortion And Blackmail Against Desert Herald Publisher