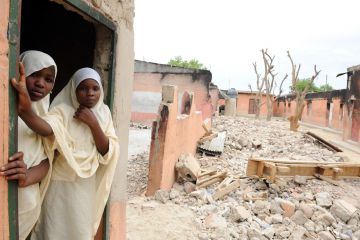 Around 100 girls are thought to have been abducted in an attack on a school in north-east Nigeria, officials say.
Subscribe to our newsletter
Gunmen reportedly arrived at the school in Chibok, Borno state, late last night, and ordered the hostel’s teenage residents on to lorries.
The attackers are believed to be from the Islamist group, Boko Haram, whose militants frequently target schools.
On Monday, bombings blamed on the group killed more than 70 people in the capital, Abuja.
Boko Haram, whose name means “Western education is forbidden” in the local Hausa language, has been waging an armed campaign for an Islamic state in northern Nigeria.
A government official in Borno state told the BBC around 100 girls were thought to have been abducted from the school.
The exact number of missing students had yet to be established, as some of the girls had managed to return to their homes.
Parents had earlier told the BBC that more than 200 students had been taken from the school.

Residents in the area reported hearing explosions followed by gunfire last night, said BBC reporter Mohammed Kabir Mohammed in the capital, Abuja.
“Many girls were abducted by the rampaging gunmen who stormed the school in a convoy of vehicles,” AFP news agency quotes Emmanuel Sam, an education official in Chibok, as saying.
Another witness, who requested anonymity, told AFP that gunmen overpowered soldiers who had been deployed to provide extra security ahead of annual exams.
A student, who did not wish to be named and managed to escape, told the BBC they were sleeping when armed men burst into their hostel and asked to be shown the school’s store.
The schoolgirl said the men loaded the food items in the store into a truck and ordered some of the girls to climb in.
The other girls were packed into a bus and two other trucks, one carrying sacks of food and the other petrol.
The girl said the convoy had passed about three villages when the truck she was in developed a fault and was forced to slow down.
Source: BBC