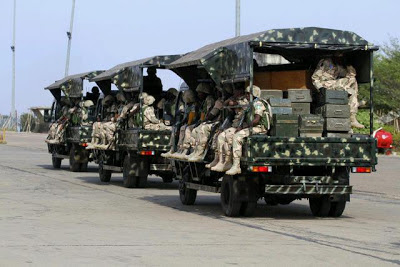 Nigerian military today announced that the Joint Task Force, JTF in charge of counter-terrorism operations in North East has been disbanded and a new  army division the Army Command will from now take charge of all such activities undertaken by JTF.
In a statement by the Director of Defence Information, DDI, Brig Gen. Chris Olubolade he said; “the command of the ongoing internal security operations in the North East will tomorrow, (Monday) enter a new phase as the control of the mission reverts to the Army Headquarters.   Accordingly, a new army Division has been created and will take off to continue the counter-insurgency operation with immediate effect.
Subscribe to our newsletter
“Coming three months into the mission to stamp out terrorism in the North East, this development is in line with the plans laid out for the conduct of the operations to execute the mandate spelt out in the State of Emergency declaration by the President, Commander-in-Chief.  The phase being concluded on Monday was executed by a Joint Task Force composed by troops drawn from the Services of the Armed Forces as well as other security agencies who conducted Operation BOYONA.

“Code-named Operation BOYONA, an acronym derived from the names of the 3 states of Borno, Yobe and Adamawa covered by the State of Emergency declaration, the effort was meant to constitute the first phase of the counter-terrorists operation.  The Nigerian Army will now be solely in charge of the operations, but still under the routine guidance of the Defence Headquarters.
“A General Officer Commanding (GOC), in the rank of Major General is being proposed to command the new Division which will have its Headquarters in Maiduguri.  He is due to take over Command and the assets of the Headquarters of the Joint Task Force.
“The new Division is to continue with the conduct of counter-terrorists operations in the North East which comes under its Area of Responsibility.”