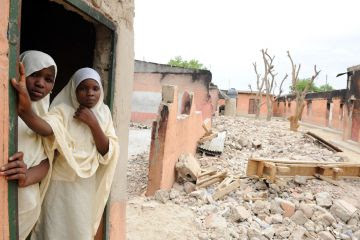 At least four people were killed and more than 100 houses burnt down on Saturday when members of the Boko Haram, attacked Arboko village behind Gwoza hills in Borno State.
The gunmen were said to have launched the attack around 2:30 am on Saturday and overran the villages before dawn. The village is said to be inhabited by a tiny Christian minority.
Subscribe to our newsletter
Executive Director, Stefanos Foundation, Mr. Mark Lipdo, said in a text message on Saturday that cries by the villagers for help did not yield any fruit, until they were completely overrun by the gunmen.
He said, “Reports just coming in now around 2:30 am says Arboko community of Gwoza, Borno state is presently under attack. Sources said houses are now on fire. Villages behind Gwoza hills said their plea for soldiers to protect them has not been heeded and these majority Christian communities have continued to come under attack”