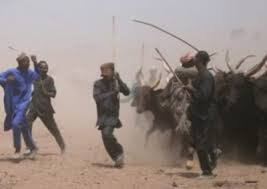 Several families were thrown into mourning weekend as no fewer than 44 persons died in violent clashes and auto accidents across the country.
Separate attacks on Benue communities by suspected Fulani herdsmen claimed 21 lives while 16 others died in an auto accident on the Makurdi-Gboko road. Seven persons were also feared dead in Uyo, Akwa Ibom state capital in a clash between three cult groups.
Subscribe to our newsletter
Vanguard gathered from sources that the affected Benue communities that were attacked include Apera, Gberija, Tse Pilla, Uchagh, Ukaha, Atenger, Agema and Agule in Guma where six persons were killed while another 15 were killed at Oguchi-Ankpa in Agatu local government area by the invaders.
Suspected Fulani herdsmen killed 21 in Benue
According to our source in Guma local government council, “They marched into our villages from Awe in NasarawaState and passed through Damko before invading and burning down eight villages in Guma local government.
“Unfortunately, the herdsmen stormed the affected villages when most men had gone to their farms and since we thought that the persistent crisis had been settled by both the Benue and Nasarawa state governments, we were not prepared for the surprise attack.
“They killed six of our people who were mostly women, because they were at home preparing meals for their husbands and children who had gone to their farms at the time of the attack.
“Several persons were seriously injured while many are still missing as at today and no one has a clue as to their whereabouts.
“In fact this latest attack has brought to the fore the need for both the Benue and Nasarawa state governments to take a closer look at  overhauling the security apparatus operating on the border between the two states,” he said.
Meantime, following the weekend invasion of Benue communities by suspected Fulani herdsmen, Governor Gabriel Suswam has charged the people of the state to be vigilant and report suspicious movements in the communities to security agencies.
Governor Suswam who spoke yesterday at the Catholic Church, Oshigbudu after inspecting the damage at Enogaje, one of the communities earlier attacked by the marauders, urged the people to “be security conscious and report suspicious movements to the relevant security agencies”.
16 die in auto accidents
16 persons were also reportedly killed in a ghastly motor accident when a fully loaded 14-seater bus ran into a heavy duty truck  and a taxi on the ever busy Makurdi-Gboko road.
Vanguard gathered from eyewitnesses that the accident occurred at about 9a.m. Sunday after Wannune Market in Tarka Local Government of Benue state.

According to the witness, “the 14 seater bus belonging to Pleasure Travels (from the inscription on the body) was said to be heading to Jato-Aka in Kwande local government when it collided with a tanker at top speed that was coming from an opposite direction after the truck had overtaken another car.
“The driver of another car following the tanker apparently lost control of his vehicle and also hit the already collided vehicles leading to the death of about 16 at the spot.
Efforts to get the Managing Director of Pleasure Travels were not fruitful as no staff of his company was willing to oblige his contact but a staff who pleaded not to be named confirmed the development and added that their staff, a mechanic who had joined the ill-fated bus to repair one of the company’s buses also lost his life in the mishap.
When contacted, the Benue State Police Public Relations Officer, PPRO, Deputy Superintendent, DSP, Daniel Ezeala said the Police had so far recorded 14 deaths from the accident.
Cult war claims 7 lives in Akwa Ibom
Also, no fewer than seven persons were feared dead following the clash between three cult groups, the Vikings, Red Skin, and KKK, otherwise known as Klans men.
Although the cause of the clash was not yet known, Vanguard leanrt that trouble started somewhere around Akpan Essien Street, where some young men who were drinking engaged in an argument which degenerated into exchange of punches and a free-for-all
One of the victims, a 27-year old boy, Anieyie Okon Essien of No. 10 Asukwo Akpan Street, Ewet Offot, in Uyo Local Government, and a driver in Government House, who was killed was buried in the father’s compound on Saturday
According to an eyewitness Anieyie was shot twice by some unidentified cultists, while another cultist who was a little far from him shouted, “finish it, confirm,” before the people that shot him brought out their knives and matcheted him to death.
Vanguard learnt that another person was killed in Akpa Ubeh, around Itam Junction, and another on Iboko street.
When Vanguard visited the compound of a certain young man alleged to be cap’n of one of the cult groups in Anua village, there were more than 50 young boys in the compound said to be there to protect their leader.
Residents of Udo Ikpe, Urua Udofia, Udoinwang, Anderson, Akpa Edor, Asukwo Akpan streets, in Uyo metropolis complained that they have been living in fear as cultists have been harrassing and terrorising them in the last one month.
The State Police Public Relations Officer, Mr. Etim Dickson, confirmed that the police have arrested about seven cultists who were in the State Police headquarters, and that they would be prosecuted soon.
He said, “we are aware that for sometime now the cultists have been killing themselves. We have made some arrests through the combined efforts of the Quick Response Squad, and the policemen of the ‘A’  Division.  We will make sure we prosecute them no matter who is involved.”
Source: Vanguard