Asari Dokubo Writes Obasanjo, Says He Is The ‘Chief Assassin Of All Times 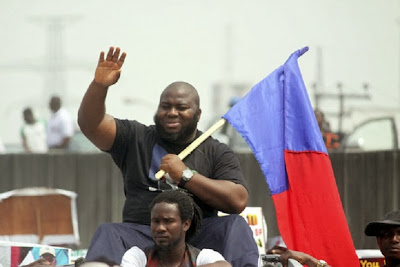 In response to Former  Obasanjo’s letter to President Jonathan, leader of Niger Delta Peoples Volunteer Force (NDPVF), Mujahid Dokubo Asari,  yesterday wrote to Obasanjo calling him Chief Assassin of all times.
In his letter Asari said; “I want to remind you of the startling move you made on my life during the momentous days, leading to the historic Isaac Boro celebration on the 16th of May 2005,” he recounted.  “At that time the Bayelsa state Government was under Chief D.S.P. Alamieseigha. Chief DSP Alamieseigha had warned that the 1million man march the NDPVF was organizing to protest the injustice of the Nigerian state against the Ijaws and other oil bearing nation should not hold and would not be allow into Bayelsa state because of a security report that emanated from you that I didn’t know at the time. The report or plot to truncate the march was grave and dangerous, as the Executive Governor of Bayelsa State Chief D.S.P. Alamieseigha, told me the Bayelsa State Government couldn’t guarantee our security – my security.
Subscribe to our newsletter
“The Governor, Chief D.S.P. Alamieseigha was away in South Africa at the time. Goodluck Jonathan was then the acting Governor of Bayelsa state, and asked us not to come into Bayelsa state of course we brushed off all obstacles whether real or imagined that were mounted not to let us into Yenagoa.
“Chief D.S.P. Alamieseigha then informed me that you – General Olusegun Obasanjo, sent 5 snipers to kill me in Yenegoa and that he -Chief D.S.P Alamieseigha accommodated them at the government house in yenegoa. That he traveled out of the state and directed the Bayelsa State government not to allow me into Yenegoa to avoid my being killed in Yenegoa by your snipers – as he didn’t know if you had sent other snipers into the state.It downed on me, why Dr. Peter Odili, gave us all the resources we sought– it was to push me into a den of your snipers – because he offered us assistance even when we are not the best of friends, providing all the resources we needed to convey us out of town.”

Insisting that Obasanjo is the leader of killers, Asari stated, “ I wonder why you, the Chief Assassin of all times, would accuse President Goodluck Jonathan of training 1000 snipers and having a watch-list of political opponents when he has tolerated your insane excesses along with your mutinous gang which no head of government the world over would have so tolerated forgetting so soon that this was the same infamous journey you embarked on during the regime of General Sanni Abacha that nearly cost you your life.Until date, the mystery surrounding the death of your kinsman and former Attorney General and Minister of Justice, Late Bola Ige’s death has not been unraveled. So also is that of my kinsmen AK Dikibo and Chief Marshall Harry. At the time they were felled, AK Dikibo was national vice chairman (south-south) of the PDP while Chief Marshall Harry was former national vice chairman (south south) of the PDP and also the national vice chairman (south-south) of the ANPP, as president of the Federal republic of Nigeria you were the national leader of the PDP. At that time, many public analysts described the PDP as a nest of killers. Governor Orji Uzor Kalu of Abia state, clearly stated that your hands may not be clean regarding the brutal killing of the then Vice Chairman of South-South Zone of the PDP – A.K. Dikibo.”
According Asari he said Obasanjo is an ethnic champion, contrary to his national slogan adding that; “Name one Nigerian leader that wasn’t known for his clannish, ethnic and tribal interests,” he challenged.  “How has Nigeria fared since independence if not on the tuft of steely ethnic considerations? How do you expect President Goodluck Ebele Azikiwe Jonathan to be divulged of this, after you led many others in the display of ethnic and tribal purges?
“Why have you singled out Goodluck Ebele Azikiwe Jonathan to be sacrificed on the altar of ethnicity, sectional and bloody intrigues, designed to incite Nigerians against the Ijaws and his government? Is it because Goodluck Ebele Azikiwe Jonathan is an Ijaw man or as you once described him – as a weak minority leader of Nigeria whose aspiration must be limited because he is an Ijaw man.What often creates violence, especially in Africa is when unguarded utterances are made by well connected ethnic chauvinists that provoke untenable ethnic bickering, bad blood and insinuation of violence, amongst hitherto friendly people in a multi-plural state. I find your warning that President Goodluck Ebele Azikiwe Jonathan maybe the last Ijaw to rule Nigeria a little childish. I believe you think the Ijaws are far too small, too few and deeply insignificant to assert any ambition to rule Nigeria. The dream of Ijaws is not to rule Nigeria but to rule a country that is theirs – a truly great and free country that believes in the dignity of labour and the virtues of good leadership. If Ijaws won’t rule Nigeria then they must seek their own country, in line with universal principles of self- determination and rule ourselves because Ijaws won’t succumb to be made slaves- Never!”
Concluding in his letter he said; “Finally, your evil plot to put me away before the 2015 general election failed in the Republic of Benin. I end this piece by saying Allah is on my side. Despite your brutal attack on me, and plot to kill me, Allah has been my helper and has not abandoned me. Your blood-curdling incitement of the authorities of the Republic of Benin against me, at my exiled home, so as to have me docked, tried and sentenced for national security related offences replays what you did before. The fact that I escaped unhurt when all hope was lost is a pointer to my supernatural fortification, leading and protection. In your plot to have me sidelined, Allah used President Goodluck Jonathan to rescue me.”

Go And Die; Nigerians Tell Oshiomhole As He Battles For Survival In Secret London Hospital After Auto Crash By Fejiro Oliver