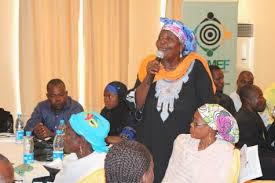 A PROMINENT anti-GMO campaigner in Nigeria, Madam Juliana Odey,  also known as Mama Cassava, a recipient of the Comrade Che Ibegwura Award in 2010, has passed on.
AkanimoReports gathered late on Thursday night that she drifted away peacefully to glory on Tuesday, December  10.
Subscribe to our newsletter
Former Chair of Friends of the Earth International (FoEI), a global federation of environmental rights advocacy groups, Nnimmo Bassey, told this news service on Friday: ‘’The passing on of this notable Nigerian cassava grower and anti-GMO activist, Madam Juliana Odey, marks another loss in our corp of committed civil society activists.
‘’Madam Odey was a farmer and a staunch opponent of the introduction of genetically modified organisms (GMOs) into Nigeria. She was a key participant at Health of Mother Earth Foundation’s Workshop in October 2013 on the Nutrition and the Convention on Biological Diversity. We will sorely miss her articulate, inspiring, strong and uncompromising voice’’.
Bassey who is currently the Director of Home of the Mother Earth Foundation (HOMEF) said the late Madam Odey has never flustered in saying  loud  and clear  that  “Nigeria and indeed the whole of Africa does not need GMOs!”  Farmers can feed the world and she is ready to galvanize women in Nigeria to campaign against GMOs.
AkanimoReports also gathered that she was a loving and protective mother and an adoring and adored grandma. She was treasured by all her family, friends, allies and comrades.
She wasn’t always the easiest person but her breadth and  depth of personality meant that we all remained gladly in her wake.
Without doubt, Mama Cassava will be greatly missed by the environmental rights community.
Her funeral arrangements will be announced by her family soon.
Her citation as recipient of the Comrade Che Ibegwura Award 2010 by Environmental Rights Action (ERA), Nigeria’s foremost environmental rights advocacy group:

Madam Julina Odey also known as Mama Cassava was born on the 16th of July 1941, she hails from Bekwara in Cross- River State. She has grown cassava for more than a decade. She was the Coordinator time Cross River State Coordinator of the Cassava Growers Association of Nigeria and presently in the board of the organisation
She has been involved in the campaign and mobilization of rural women on the benefits and need to cultivate cassava, a staple food crop consumed by people in Nigeria and in some other parts of Africa daily. In recent times, the biotech industry, the Bill Gates and their allies are doing everything within their power to drive Nigeria and the whole of Africa down the GM road, but their attempts have been faced with strong resistance. Mama Cassava had been and is still one strong voice speaking firmly against the introduction of GMOs and in particular GM Cassava (a.k.a super cassava) in Nigeria.
She is unswerving in her belief that we do not need GMO; Nigerians can feed themselves and that farmers can feed the whole world.  She has maintained her stance on “No to GMOs” in the various fora she had been invited to speak, either organized by pro GMO or anti – GMO groups. Worthy of note is the Public Hearing on the Biosafety Bill organised by the Joint Committee on Science and Technology and Agriculture, Abuja, on the 9th of December 2009, where she minced no words in condemning the introduction of GMOs via the bill into Nigeria and stated that Nigeria does not need GMOs.  It is instructive to note that, like most anti – GMO groups, she was not invited for this hearing, but because of her doggedness she went and spoke for what she believes in, with some of her members to support our collective cause.
Mama Cassava had her primary education at Holy Ghost Primary School, Makurdi, Benue State in 1948 – 1954 thereafter became a student of Women Training Centre in Enugu, Enugu State in 1955 – 1956.
In 1957 – 1958, she proceeded to Sacred Heart Hospital, Obudu, Cross River State, and in 1959 – 1960 attended Malta Miscericodae Hospital Afikpo, Ebonyi State.
As a lover of knowledge and research, Mama Cassava had a stint ( a practical training) at the Federal Institute of Industrial Research, Oshodi, Lagos State in 1990, International Institute of Tropical Agriculture, Ibadan, Oyo State in 2004, Raw Material Research and Development Council, Abuja F.C.T in 2007 and International Institute of Tropical Agriculture, Ibadan, Oyo State 2010.
Being a renowned reader and researcher she has the following certifications to show for it: Certificate in fish drying, bottled palm wine, soap making, odorless fufu, fufu flour from cassava in 1990 Certificate in High Level Quality Cassava Flour (HQCF) and Glucose syrup from cassava in 2007 Certificate in cassava processing and product development and cassava product packaging and labeling in 2010 Certificate in High Level Cassava Production “ Unleashing The Power Of Cassava In Response To The Food Crisis In Africa” In 2010
Mama Cassava, despite her age, (69 years old woman!) has remained undaunted and active in the struggle and has over the years demonstrated this by the depth of her knowledge and work experiences. She started her working life as a consultant on agriculture/food processor and a trainer in 1990.
Still in 1990, she became the Chairperson, Managing Director, Jucab Ventures Nigeria Limited. While in 2005, she embarked on cassava training workshop in two senatorial Districts of Cross River State tagged “TRAINING FOR SUSTAINABLE DEVELOPMENT” where women were trained in various processes of using cassava to produce chin-chin , meat pie, doughnut bread e.t.c.
Meanwhile, in 2000 – 2005, she was the Chairperson, Nigeria Cassava Growers Association, Cross River Chapter.
In 2007, she became a member of the Board of Trustee (BOT) of Nigeria Cassava Growers Association of Nigeria while in 2008, became the Vice Chairperson, Potato Growers Processing and Marketing Association of Nigeria(POGPMAN).
In 2009, she was the Zonal Co-Coordinator, South – South Potato Growers Processing and Marketing Association of Nigeria. (POGPMAN).

State Within The State: Nnpc As A Metaphor For Impunity. By Jaye Gaskia;