All Rebel PDP Governors And Lawmakers Will Lose Their Seats – Tukur 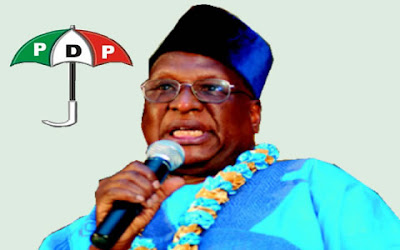 The National Chairman of Peoples Democratic Party, PDP, Alhaji Bamanga Tukur, this afternoon dismissed the allegation that there is a different PDP faction, declaring that he is firmly in charge. Addressing the press at the PDP National Secretariat in Abuja, Tukur threatened that “all persons elected on the platform of our great party
Subscribe to our newsletter
at all levels who identify with these enemies of the oneness and greatness of our party shall have their seats declared vacant as required by law.”
Political watchers say the PDP chairman’s declaration is “an indication that the reconciliatory meeting between the main Peoples Democratic Party (PDP) and its splinter group, ‘New PDP’ have broken down”.
Tukur stated that “Without any iota of doubt”, that the Peoples Democratic Party has no faction and there is neither room nor reason whatsoever for such a claim under any guise.
“The PDP has only one duly elected National Executive Committee (NEC) under my Chairmanship. I wish therefore to state with all emphasis that any group of persons parading themselves as leaders of NEC or any other organ of our party are impostors and I urge all Nigerians, especially the security agencies and other institutions of democracy to regard them as such.”
The PDP supremo stated “categorically that the PDP as the sole custodian of the sacred mandate of over 160 million Nigerians and who in the last fourteen years has lifted high the banner of democracy will not fold its arms while some undemocratic and unpatriotic elements destroy our common destiny by causing divisions and confusion among the people.”
Continuing, he said: “Consequently, we shall ensure that any person who is not duly elected into any leadership position in our great party and has not been duly assigned any role but goes ahead to arrogate such to himself will be made to face the full wrath of the law.

“We shall leave no stone unturned to ensure that such persons and indeed any other individual who attempts to subvert the leadership of the PDP shall reap in full, the consequences of such actions.
“I wish to emphasize that the PDP has adequate mechanism for internal conflict resolution. All party members are therefore advised to ventilate their grievances through this medium. There is only one lawfully recognized PDP and I am firmly in charge.”
Elombah.com recalls that six governors elected on the platform of the PDP had walked away from the special national convention of the party on Saturday and proceeded to establish a parallel faction of the party on the basis of alleged multiple infringements of the rules of the party and hostility against some of the leading officials.
The six governors: Aliyu Wamakko (Sokoto), Sule Lamido, (Jigawa), Murtala Nyako (Adamawa), Rabiu Kwankwaso (Kano), Babangida Aliyu (Niger) and Ahmed Abdulfatah (Kwara) were joined in the walkout by former Vice-President Atiku Abubakar. They were to reconnect with Governor Chibuike Amaechi of Rivers State who was three months ago suspended from the party by the Tukur leadership and proclaim the establishment of the Baraje faction
58 members of the House of Representatives publicly switched sides to the Kawu Baraje New PDP (nPDP) yesterday. Earlie, 22 senators had also switched to the side of Baraje.
Last night President Goodluck Jonathan was said to have begun a meeting with 10 governors of the PDP.
Source: Elombah

PDP Break-Up: Who Will Deliver Jonathan From Sycophants? Written By Obinna Akukwe