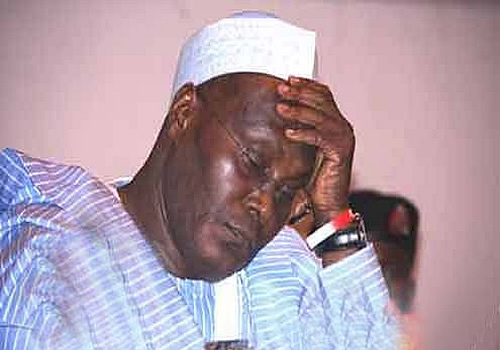 Former Vice-President Atiku Abubarkar’s plot to lure the seven aggrieved governors of the Peoples Democratic Party (PDP) into the newly formed Peoples Democratic Movement (PDM) may have hit the rocks, as the governors appear to prefer alliance with their counterparts in the All Progressives Congress (APC). The alliance talk according to a reliable source made available to Sunday Mirror is billed to commence on Tuesday in Abuja.
It was gathered that the proposed meeting of a faction of the Nigerian Governors’ Forum (NGF) led by the Rivers State governor, Rotimi Amaechi, fixed for Tuesday is a cover for the alliance talks which the leadership of the APC had three days ago, endorsed.
According to a competent source in the APC who confided in our correspondent, the need for the governors to meet on time was informed by the reports that the newlyregistered Peoples PDM led by the former V-P was also making overtures to the G-7 governors to join forces with it ahead of the election year.
“You know that it is impossible for the governors in the new PDP to work with Atiku; he merely came into the picture at the venue of the convention, so the best thing is for them to meet with the APC governors and agree on what to do to vote out the PDP in 2015.

“The options are many but they are trying to harmonise them so that when they come out finally, no one will fault the other.” The source gave two options as outright defection to the APC or staying within the PDP to undermine it in 2015.
He added; “The PDP and the Presidency are wasting their time in the so-called peace talks because the governors have all resolved not to work for Jonathan, so how do they fit?” APC’s interim National Publicity Secretary, Alhaji Lai Mohammed on Thursday gave indications that the party leadership had directed the APC governors to commence consultations with their PDP counterparts who are aggrieved and had gone ahead to form a parallel body known as the new PDP. Mohammed said: “It is not a matter we discussed at the executive committee.
But I know that what the party decided is that since our governors are also members of the Nigeria Governors Forum (NGF) and they are also meeting regularly with these other governors, we have left that assignment in the hands of our governors so that when the about seven or eight aggrieved governors of PDP are desirous of making contact with the party, they should do so with our governors.”
Although the APC spokesperson denied that Tuesday’s meeting of the NGF was not used as a cover for the alliance talks between the G-7 governors and the APC governors, there was nothing wrong in colleagues interacting on national issues.
“I see nothing wrong in if colleagues are interacting in the interest of the nation and exchanging ideas about how the country will move forward from the current doldrums; I am not saying the meeting of the NGF called for Tuesday is actually meant to commence the talks you are referring to, but I see nothing wrong in the exchange of ideas that will move us forward”, he said.
Source: National Mirror