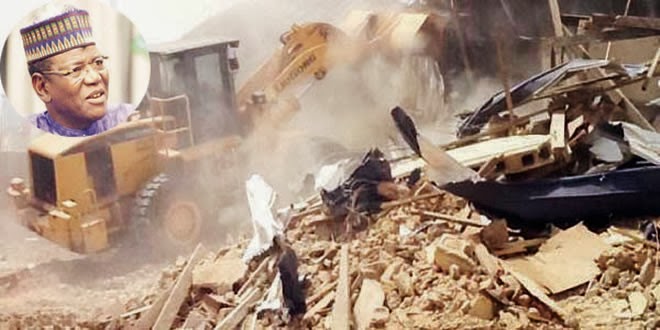 No fewer than 1000 temporary shops were destroyed in Dutse, Jigawa State by the Dutse Capital Development Authority (DCDA). While commenting on the demolition, the chairman DCDA Alhaji Bashir Aminu said all the shops that were destroyed were constructed illegally, morseo that the demolished shops affects the security and beauty of the town.
Speaking further, he said prior to the destruction of the illegal shops along the Abacha Street and other places in the state capital; so a notice was served to them to vacate. However, they were adamant as they refused to heed to the notice, but very unfortunate none of them was ever ready to vacate from the area, and a situation which made the DCDA formed a task force committee.
Subscribe to our newsletter
Explaining further he said that the task force committee was set up to checkmate the activities of demolition and also to make sure that nobody operates business along the road side which is against the plan of the Jigawa state government adding that the committee include the SSS Police, CIV vigilant groups members of the DCDA and Jigawa State Environmental Protection Agency, JISEPA, all in bid to ensure the success of the exercise.
Meanwhile, some people who engage in petty trading along the road side decried the aI don’t care attitude of the DCDA, a move which they described as disgracing to general public explained. Asking rhetorically that if they don’t operate under street where will they go to, as what they are doing are the only means of livelihood.
The affected men and women whom their shops were destroyed, said that they that Governor knows his tenure is coming to an end and that is why he is using his power to send people out from their business, as they added that this will destroyed Governor Lamido his political carrier.

In his response to the comments by the petty traders, the Chairman of DCDA, Alhaji Bashir Aminu said they will never desist from taking their decision, as they will not allow anybody to operate illegally along the street, adding that all traders must do their trading at the business site and Dutse central market.
The chairman also retreated that all illegal structures in the state capital will soon be demolished and that henceforth that whoever did not obey the order by registering his plot and all necessary things that an occupant supposed to will be dealt with.
It was reliably gathered that governor Lamido paid an expected visit to state secretariat to see how thing are going on in the state secretariat, during his visit sent out all the traders which include the food sellers, Kolanut sellers who do their trading inside the secretariat as he said that operate illegally and as such every person who sells in the secretariat were chased out without any form of notice.
According to a reliable source, the governor used the Police and other security operatives to send out all people they were operating illegally at the secretariat, it walso gathered that many of them left the secretariat crying, while some were left with gloomy face because they don’t know where they will relocate to operate their business in the state as the area were they have been sent away.
Investigation carried out by this reporter reveals that even the  trucks owner who involve in selling sand and building materials will soon relocate to their site which will soon be provided for them, while the petty traders who were affected in the demolition will be moved to the  central market.
Moreso, the Mechanic people have been instructed to relocate to the mechanic villageas the DCDA warned that it will close down their place of business, asserting that they are also operating illegally because as the  state government has already provided them with place of doing their business, however they refuse to relocate .

U.S. Freezes More Than $458 Million Stolen by Former Nigerian Dictator in Largest Kleptocracy Forfeiture Action Ever Brought in the U.S.