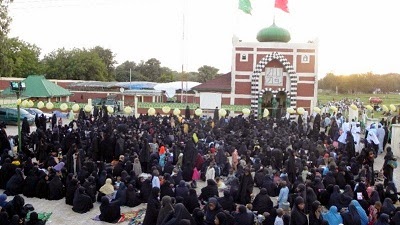 A group Centrum Initiative for Development and Fundamental Rights Advocacy (CEDRA) has petitioned the National Human Rights Commission (NHRC) over the shooting of Shiite members in Zaria, in their letter the group  said; We Demand Full Investigation of Killing of Shiite Protesters In Zaria, On 26th July 2014, Shiite sect embarked on their annual international QUDS procession. The rite is part of their last Friday of month of Ramadan activities that was declared in the 80s by the spiritual leader of the Iranian Islamic Revolution Ayatollah Khomeini.”
Subscribe to our newsletter
Writing further they said; “ Here in the Nigeria, the sect has been observing QUDS tradition for the past 32 years in many cities. Most of these processions went without clashes with either the law enforcement officers or public. This year’s procession ended with incidences of shooting of Shiite members in Zaria. Their leader, Mallam El-Zakzaky, loss three of his children and other members. Till this moment, corpses of two of his sons and those of his members have not been given to them for burial. And they are yet to have access to the wounded in the hospital, the Group said.”

The Group continues as they said; “The right to peaceful protest in support or against local or international issues is constitutionally guaranteed and supported by many international protocols. The only time such rights are lightly tempered with is in war with other countries and emergency rule. To the best of our knowledge, we are in neither. We therefore condemn in strongest terms the shooting and killing of peaceful protesters in Zaria on 26th July 2014 and call for a full investigation of the Zaria Killing by bodies charged with monitoring and reporting of human rights violations.”
The Group continued in their petition signed by one Dr. John Danfulani for them said; “Governments in Nigeria must know that the dark days of ruling with impunity are over and have no place in a democracy. The chief duty of the State is to protect life and not take it away without authorization of the body responsible of snatching away life from citizens.We want to use this opportunity to thanks the leader of Shiite In Nigeria Malam El-Zakkaky for his restrain and calm disposition to the great loss of his sons and members. We will walk with him and his organisation in their quest to seek for justice on the this QUDS procession incidence. And we pray to God to forgive the souls of those killed and grant them Aljana.”

Nigeria Will Overcome Its Present Challenges-Tinubu