Why We Are Taking Over PDP From Jonathan, Tukur — New Factional Chairman, Baraje 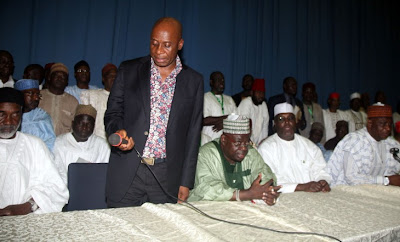 We address you today as leaders of PDP, who are worried by the increasing repression, restrictions of freedom of association, arbitrary suspension of members and other such violations of democratic principles by a faction of our party led by Alhaji Bamanga Tukur .
While we have done everything humanly possible to bring to the attention of critical stakeholders within the party the dangers inherent in the course being charted by that leadership, it has become very clear that the desperate permutations towards 2015 general elections have blinded certain people from the consequences of their actions.
Subscribe to our newsletter
Not only has the constitution of the party been serially  abused by Alhaji Tukur and his fellow travelers, all the organs of the party have been rendered virtually ineffectual by a few people who act as though above the law. Unfortunately, it is obvious that that they get encouragement from the presidency whose old calculations are geared towards shutting out any real or imagined opposition ahead of the party’s presidential primaries for the 2015 elections.
As leaders of our great party, we consider it a sacred responsibility to save the PDP from the antics of a few desperadoes who have no democratic temperament and are therefore bent on hijacking the party  for selfish ends. While the list of their violations of the tenets of our great party is long, we will highlight just a few:
The National Executive Committee of the PDP at its belated meeting of 20June 2013 approved 20 July2013 for the conduct of a special national convention.
However, that date was changed to August 31 without reverting to NEC ( the only authority vested with such powers) by a few people, apparently acting on the authority of the presidency.
Notwithstanding the fact that INEC had noted that the PDP congresses in nine states were not properly conducted, the illegal delegates from such states are being paraded at the so-called convention being held today in a cynical attempt to circumvent the law and further bring the name of the party to disrepute.
In gross violation of the PDP constitution which stipulates that the NEC meeting must hold at least once in a quarter, Alhaji Bamanga Tukur and a few people have been running the party like a personal fiefdom without recourse to that important decision-making organ of the party.
The NEC of the party accepted the resignation of the former members of the NWC whose offices were affected by INEC observations based principally on the agreement that the affected officers would be returned to their respective offices at the convention. However, against the decision of the NEC. And in a not-so-clever bid to exclude some perceived opponents of the few powerful members who are trying to hijack the party, these positions have been made Open to some Yes-men within the party.
Notwithstanding INEC instance that Senator Any Uba is the duly elected candidate of the party in Anambra State and against the background that he is so recognized by majority of our party members, the Bamanga Tukur-led Executives announced a purported suspension of Senator Uba and some other members close to him in defiance of subsisting court orders.

Despite that the PDP Constitution is very clear that the state chapter of the party cannot discipline a national officer, the Deputy National Chairman, Mr. Sam Jaja, has reportedly been dismissed by some renegades  who have hijacked the Rivers State chapter of our party with the connivance of the Bamanga Tukur leadership.
The persistent change in the list of the party’s delegates in many states as part of a deliberate attempt to rig the party’s nomination of candidates, especially at the presidential and gubernatorial levels, with a view to foisting on the PDP some unpopular candidates who are bound to lose at the polls.
The suspension without due process of the Governors of Rivers and Sokoto states. Even when the illegal suspension on Sokoto State Governor has been lifted, the Rivers Governor remains purportedly suspended for no just cause.
The illegal dissolution of the Adamawa State chapter of the party is a clear abuse of power by Alhaji Bamanga Tukur thus causing confusion in his home state.
Given the foregoing, it is very clear that the Bamanga Tukur leadership cannot guarantee for our millions of party members democracy anchored on free choice and the rule of law. We have therefore taken it upon ourselves to rescue the party from their int and dictatorial leadership.
It is indeed noteworthy that from 1999 to date, Nigerians have constantly voted the presidential candidates presented by our great party but not only dies such trust come wig enormous responsibility, we recognize that wee cannot continue to take the people f granted.
From now, the new leadership of the party under us will strive to build a fairer as well as a more transparent and accountable PDP that will putty interest of members and indeed all the people of Nigeria above that of one single individual.
For all the members of our great party who may have become disillusioned  by the anti-democratic tendencies of the Bamanga Tukur’s leadership, there is a new lease of life in the  horizon. It’s a new day for the Peoples Democratic Party.
As we take over the  leadership of the PDP, our immediate priority is to revive the culture of robust debate of all contending issues while providing a level-playing field for all our  members. These were the ideals that differentiated our party from others and endeared us to Nigerians.
We are not, and have never been a political party where one man would be taking decisions for all members and where once you do not kowtow before the presidency, you are  deemed a rebel that must be crushed. That is no the PDP  bequeathed to us by our founding fathers. That, I dare say, is no longer what PDP under our leadership will represent from today.