Awwal’s hand was allegedly roasted for adding drops of liquid disinfectant to his bath water.
Subscribe to our newsletter
According to Ngozi Ekwerike-Okoro, President, Child to Child Network, a Non Governmental Organisation, NGO, a distressed call from one of  Otun’s neighbours at 59, Suenu Street, Surulere, Lagos saved Awwal’s life.
Awwal was rushed to the Mother and Child Hospital at Gbaja where another drama ensued as the doctor on duty refused to treat or admit the boy despite pleas that the hospital was built purposely for mothers and children in the state.
According to his teachers, Awwal, who is in primary one, should not be allowed to go back to his step-mother because he is always coming to school with bruises as the neighbours who pleaded anonymity said that had been the normal punishment for the boy’s mistakes.
Awwal was later taken to a nearby private hospital for treatment and he is currently at Juvenile Welfare Centre of Alakara Police Station.
The story
According to  Ngozi, “On July 11, 2013, Awwal was rushed to the Randle General Hospital, Mother and Child Centre, Gbaja, at about 6:30pm after a distress call from neighbours.

“He sustained serious injuries from fire burns inflicted on him by the step-mother who is now in police custody. 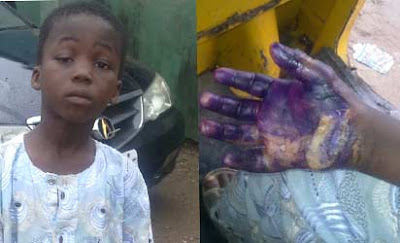 “At the hospital, we requested to see the welfare officer who we were told had closed for the day but after narrating our mission to one of the staff she referred us to the chief matron.  The chief matron issued an emergency card to the boy and directed him to see the doctor.
“The doctor, however, refused to attend to the boy, because according to her, the hospital did not have enough space to accommodate the boy, as he would  need admission for intensive care.
“We pleaded with the doctor to at least administer some first aid on the boy but she refused. We went back to the chief matron who told us after consulting with the doctor  that Surulere General Hospital (Mother and Child Centre) does not have the facility to deal with such cases. They said our best chance would be to go to Ikeja General Hospital.
“We eventually left in disappointment and went to a private hospital in Mushin, close to the juvenile centre, where he got immediate attention and  was treated free of charge.
Awwal recounts ordeal
The boy said he added small quantity of Izal disinfectant to his bath water and his step mother got angry and put his hand on a burning stove since Sunday and he was not taken to hospital till Thursday when neighbours called the Lagos State Child Protection Network who mobilised the JWC Alakara to rescue him.
Source: Vanguard