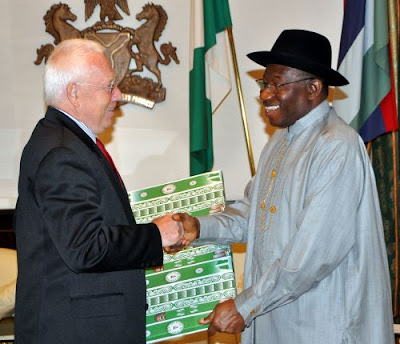 President Goodluck Jonathan said Friday in Abuja that although measures taken by his administration had resulted in a significant reduction in the occurrence of terrorist attacks in the country, the federal government will keep on doing everything possible to further enhance security in all parts of the country.
Speaking at an audience with the outgoing Representative of the Delegation of the European Union to Nigeria and ECOWAS, Mr. David Mac Rae, President Jonathan said that his administration will remain very proactive in combating terrorism and insecurity.
Subscribe to our newsletter
“As a government, we are doing everything possible to improve our country on all fronts. We are consistently adapting our security architecture to deal with terrorism which has become a challenge to the whole world.
“Boko Haram is being progressively weakened but we are not resting on our oars. We will continue to do everything possible to achieve greater security for all who reside within our borders,” the President assured Mr. Mac Rae.
Affirming that there are many positive things happening in the country, President Jonathan said that his administration will continue to do its best to correct negative perceptions about the country such as the notion of widespread insecurity and corruption.
The President welcomed declaration by the outgoing ambassador that he had recently traveled to the Niger Delta and some Northern States and found people there going about their normal lives and businesses without fear.

He urged him to assist in correcting current misconceptions about Nigeria by taking that positive message to the European Union and the rest of the world.
President Jonathan seized the opportunity of Mr. Mac Rae’s visit to commend the European Union for its past and ongoing support towards improving the electoral process in Nigeria.
He also assured Mr. Mac Rae that Nigeria would act to facilitate the early conclusion of a partnership agreement between ECOWAS and the European Union.
Reuben Abati
Special Adviser to the President (Media & Publicity)
August 30, 2013