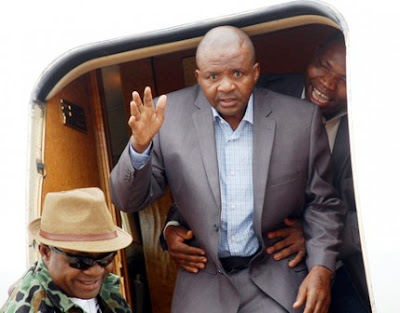 The Taraba House of Assembly yesterday passed a resolution adopting the decision of its executive session of August 29, mandating the acting governor to continue running the affairs of the state. The House, at a special plenary comprising nine members, empowered Alhaji Garba Umar to take full charge of the administration of the state as the acting governor.
The Deputy Speaker of the House, Mr. Tanko Maikarfi, who presided over the session, noted that the sitting was convened in order to adopt the resolution of the last executive session. After reading a copy of the resolution to the members present, Mr. Aminu Umar (PDP-Jalingo II) moved a motion for the adoption of the resolution, which was seconded by Mr. Mohammed Gayam (PDPGashaka).
The deputy speaker thereafter called for a voice vote and the members unanimously voted in favour of the resolution. Maikarfi then directed the Clerk of the House to communicate the resolution to the acting governor for action.
The Deputy Clerk, Mr. Mellah Ongu, later told the News Agency of Nigeria (NAN) that the nine members of the 24 memberlegislature had formed a quorum. Governor Danbaba Suntai had arrived the country 10 days ago from the United States, where he recuperated after receiving treatment for injuries he sustained from a plane crash late last year.
The governor, upon arrival in the state immediately dissolved his cabinet, removed the Secretary to the State Government, SSG, and all his aides. But, the state House of Assembly has since declared the governor unfit to govern, as he is perceived to be convalescing, and has resolved that Suntai’s deputy, Umar, continue with his leadership of the state.
The decision has, however, brought about unusual apprehension in the state. The former SSG in the sacked cabinet, Mr. Garbey Yawe, yesterday resumed duty in line with the directive of the acting governor, who had last week countered the dissolution of the cabinet by Suntai, urging the dismissed exco to remain in office. As things stand, it could be said that there are two parallel SSG offices in the state, with the Suntai camp recognising Barrister Gideon Timithy Kataps, as the new SSG. There were indications that majority of the sacked cabinet members have sided with the Suntai camp. This claim has however been countered by the Chief Press Secretary to the acting governor, Kefas Sule, who said that only three cabinet members have truly disobeyed the order to resume.
“Only three commissioners have handed over, and they are: Information Commissioner, Justice Commissioner and Finance Commissioner,” he said. President Goodluck Jonathan yesterday waded into the matter by dispatching a high powered presidential team to the state.
The team, which is billed to arrive Jalingo, the state capital today will hold talks with the two camps with a view to resolving the impasse amicably. This was disclosed to newsmen in Jalingo by Sule yesterday.

He said: “A high powered delegation from the presidency is due here in Jalingo, the state capital by 11a.m. tomorrow (today) to help resolve the misunderstanding.
“Two other delegations that will also be here in Jalingo tomorrow comprise those from the PDP national secretariat and the National Assembly.” Asked about a report, which said banks in the state are not honouring transactions originating from the acting governor, Sule said: “It is not true.
When I read that in one of the national dailies, I reached out to appropriate authorities who said it was a lie.” On the status of his principal, the spokesman said: “The state assembly today at a plenary confirmed their position on the health status of Governor Suntai by mandating His Excellency, Alhaji Garba Umar to continue with his duties as the acting governor of the state.”
Sule also cleared the air about a claim that the acting governor does not want to relinquish power. “The acting governor is ready to revert to his constitutional deputy governor role at anytime, provided the right thing is done.
“Don’t forget my principal was mandated to act as the governor of Taraba State, consequent upon a legislative transmission of a document to that effect; so he will stop acting only if there is another letter transmitted from the state assembly reverting him to his deputy governor role,” he said.
He dismissed any claim of a sour relationship between the acting governor and Suntai, stressing that the two leaders have no problem whatsoever.
“What the acting governor is saying is, he wants to be allowed to see his boss and give him account of his 10 months stewardship,” he added. Meanwhile, the Nigerian Medical Association, NMA, has requested the constitution of a medical board to help ascertain the medical fitness of Governor Suntai. NMA made the demand at a briefing by its President, Dr. Osahon Enabulele, in Abuja yesterday.
“NMA is very prepared to make available her members who are professionals in various fields of medicine to constitute a medical board to resolve the lingering question of the medical fitness of the governor,” the association said.
The NMA at the briefing also called for the establishment of Office of the Surgeon-General of Nigeria whom it said “would ordinarily have been saddled with the responsibility of independently assessing the medical fitness of public and political office holders, and thus save the nation the great embarrassment and distress caused by the unanswered question of the medical fitness or otherwise of our public and political leaders.”
Besides, the group said it had given the Federal Government a 21-day ultimatum to inaugurate the Governing Board of the Medical and Dental Council of Nigeria, MDCN.
NMA said: “The Medical and Dental Council of Nigeria remains greatly handicapped by the fact that there is currently no judge/ Council Chairman to preside over investigated cases of negligence and unethical conduct brought before it.
Source: National Mirror