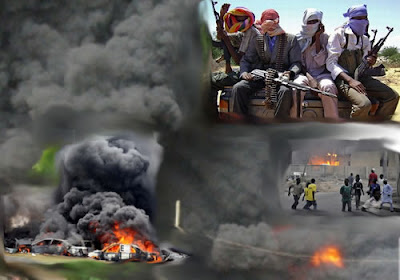 Insurgents now hide explosive devices in a new tactics to unleash terror on citizens during the sallah cerebration, Weekly Trust reports.
Subscribe to our newsletter
To   continuously wreck havoc on citizens during the forthcoming sallah, terrorists are now packaging Improvised Explosive Devices (IEDs) in school bags for suicide bombers, the Joint Task Force (JTF) in Kano State has raised alarm.
The innovation, according to the JTF, was copied from Boston in the United States where two bombers strike, killing three and injuring many during a marathon last April.
Security operatives made the disclosure after raiding a bomb making factory in Guduwawa village in Gezawa Local Government Area of the state last Tuesday. According to them, the IEDs were well packaged in school bags for the suicide bombers in the factory.
An operative of the JTF told newsmen that the IEDs can be packaged in any type of school bags, saying the control switch of the IEDs is stitched at the handle of the bag and that the explosive will be triggered when the switch is put on.
“They will just carry it on their back and walk into any place or their target without people knowing or suspecting as they will be mistaken for students. This is a dangerous trend,” he said.
In a joint press conference, the Commander of the 3 Brigade of the Nigerian Army in Kano, Brigadier General Iliaysu I. Abbah and the state’s Director of the State Security Service (SSS), Mr. Bassey Eteng said the packaging of IEDs in school bags was the latest innovation of the terrorist group.
Shedding more light on the IEDs, Mr. Eteng said the plan of the terrorist group was to be using young persons of school-age as suicide bombers during the forthcoming Sallah and that the IEDs recovered from the factory are capable of killing 1,000 persons.
His words: “People should beware of the latest IEDs the terrorists are producing; it is packaged in a school bag for suicide bomber. They can carry it into the mosque, church and even schools. This is what happened in Boston; this trend is kind of copy-cat thing. People should be on look out,” he explained.
General Abbah said they have never recovered IEDs made in school bag before.  “This is the first time we are recovering something like this. They primed the IEDs in bag unlike the previous ones,” he said.
He said they have recovered materials the terrorists are using for the manufacturing of the school bag IEDs.

He listed the materials to three primed cylinders of IEDS; one primed explosive suicide back pack, 18 empty IED cylinders, 24 detonators, small bags of fertiliser, IED timers, cortex wires and three remote controls.
A visit to Gunduwawa
Located in the remote area of Kano state, residents of Gezawa were shocked to the marrow when the security operatives discovered that IEDs are being manufactured in their community.
The residents of the village who are mostly farmers were deeply asleep when gunshots by the operatives of JTF wake them up last Tuesday around 2.am and after some hours, they discovered that their tenants are manufacturing IEDs in the apartment they let out to them.
At the end of the operation, the house where the terrorists were manufacturing bombs was razed down while another house where they were living in was set ablaze and part of its   also destroyed.
An owner of one of the houses that were destroyed, (name withheld) told Weekly Trust that he rented an apartment inside his house to the ‘traders’ weeks ago.
“When they came they introduced themselves to me as traders and I gave them an apartment in my house when they came with their wives. I did not suspect that they are into terrorism and that was why I rented out part of my house to them,” he said expressing surprise at the kind of weapons recovered.
During the JTF operation, the landlord’s younger brother Zahairu Jibril, a secondary school student was killed. He said his younger brother was inside his room when he was hit by the bullets of the JTF operatives.
Zahairu’s father, Malam Jibril Audu said his son was wrongly killed by the JTF during the operation, adding that his son was not a terrorist.
“When they came and surrounded our house, my son was inside his room like any other person around 2.am when the soldiers came. His room is situated outside the house while the suspected terrorists were living inside. So, when the soldiers were shooting sporadically my son who was inside his room was shot and he died from the gun shot.
“At end of their operation, the soldiers handed over the lifeless body of my son to me and they said they will not take the corpse to the hospital not to create difficulty for me. I have leaved everything to Allah, He will take care of what has happened to me,” he said.
In response to the claim of the boy’s father, , the director of SSS said the boy was a member of the group adding that “knowing the people too well, the person that was killed is part of them,” he added.
Source: Daily Trust