Strange Fish In Ibadan A Baby-Octopus, Not A Mermaid Says Police 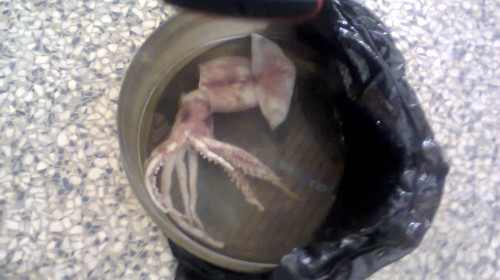 Oyo State Police Command on Wednesday debunks the story of a fish with human parts reported in Ibadan on Tuesday describing it as untrue.
It will be recalled that there was bewilderment in Ibadan the Oyo state capital on Tuesday when a adulthood woman, Ramota Salawu, hoisted the apprehension that a fish she purchased at Gege area of the town unexpectedly turned into a half human; a development that saw hundreds of residents marched to Akindele Compound in Gege, to have a glance of the mermaid fish in a bucket where it was kept.

Subscribe to our newsletter
However, the Police Commissioner, Mohammed Ndabawa told newsmen in his office that the said object was baby octopus, as he assured the residents that they have no cause to fear.
According to him, people were just spreading falsehood on the internet, about the fish.
The Commissioner also displayed the fish before newsmen as the Police have placed the woman under protective custody as he said she would be released when the tension in the town is calmed.

Igbo Presidency Not Feasible In 2015 – NZERIBE