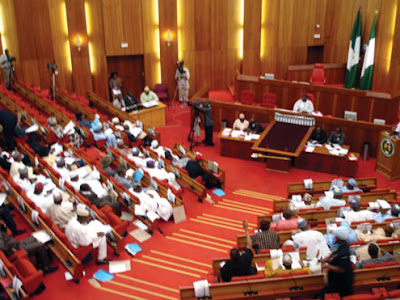 “This is what I can confirm.”
Abaribe said that the Senate would on Wednesday receive a briefing from the security chiefs in a close session.
He added: “The Senate will tomorrow host, in a close session, the leadership of the country’s armed forces for an interaction with regards to the security situation that the country is facing.
“After our interaction, if there’s need or if there’s something that we have to let you (newsmen) know, I will also let you know tomorrow after the interaction with the security chiefs.”
He said that the National Assembly would continue to support the armed forces to be sure that the security of every Nigerian was guaranteed.
Reacting to the statement made by the Chairman of the Independent National Electoral Commission, Prof. Attahiru Jega, that elections might not hold in states under emergency rule, Abaribe said there was no need for speculations.
He said: “I will not go into the realm of speculations.
“But I can say that the state of emergency is for every six months and then it will be reviewed.
“I believe that before any election will hold, that six months for a state of emergency would have elapsed and then we will also look at what the position is.
“So I don’t think that it will be right, at this time, to speculate on what is going to come forth in a year’s time because we know and we assume that things must have stabilised by that time.”
Abaribe said part of the briefing that the Senate would get from the service chiefs would also include knowing what the security situation was in all parts of the country.
NAN

What Are The Options For Dr. Jonathan?, By Garba Shehu