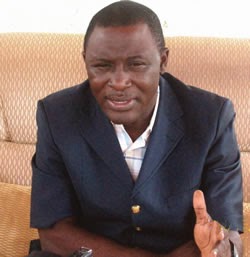 Sen. Gyang Nyam Pwajok, representing Plateau north constituency at the national assembly has called for concerted efforts to tackled the present security challenges facing the state and the nation,  stressing that the magnitude of the challenge of insecurity requires a united and concerted effort by all groups.
Pwajok  stressed that guaranteeing sustainable security for all will require the full engagement of governments and the general public. Noting that no single individual or agency  could lay claim to solutions to the myriad of problems affecting Nigerians, especially insecurity.
“We most adopt comprehensive approached to overcome the constant attacks on innocent lives  by trained militants by assisting the security agencies to identify their source of mobilisation and source of funding” Sen. Pwajok said this in Riyom LGA, on Friday when he visited the chairperson Mrs. Josephine Piyo, to sympathize with her over the recent lost of the  Gwom Rwei Riyom, Da Dung Jok and his son Col. David Dungs.
The senator who also expressed sadness over the last week attacked on Shonong village by Fulani militants which led to lost of lives and unwanton destruction of properties said there most be strong commitment by both the general public and security agencies to find solution to the security challenges facing his constituency.
He said there is no reason why innocent residents should be accosted by militants and be killed. “the act is unacceptable and enough is enough, we most rise up and face the challenge. He then condole with the bereaved family and the entire people of the zone.
Responding the chairperson Mrs. Piyo praised the senator for the concern and visit, noting that the visit is a sign to show that he hold his people in high esteem.
According to her the situation as placed the local government in a very critical and challenging situation that needs prayers for God intervention.s