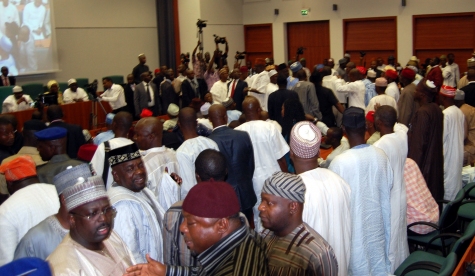 THE crisis ravaging the ruling Peoples Democratic Party, PDP, surfaced in the House of Representatives, yesterday, as members of the old PDP disrupted a scheduled meeting between the leadership of the House and the Alhaji Kawu Baraje-led new PDP (nPDP) and the G-7 governors.
No sooner had the Speaker, Aminu Tambuwal  announced that ‘this communication I am going to read concerns only the PDP members”, than a rumpus erupted on the floor of the House.
Subscribe to our newsletter
This came after he had read and reviewed proceedings of the last session in July, 2013 before the House went on vacation.
Tambuwal also read a letter from President Goodluck Ebele Jonathan on the 2014/2016 Medium Term Expenditure Framework as well as another one from Ondo State which officially communicated the death of former Governor of the State, Dr. Olusegun Agagu to members.
The development attracted one minute silence in honour of the deceased by the House.
Afterwards, the Speaker announced that the Abubakar Kawu Baraje-led nPDP had sent in a letter signed by its National Secretary, Olagunsoye Oyinlola to pay a courtesy call on the leadership of the House.
Immediately, Rep Henry Ofongo representing Bayelsa State raised a point of order during protocols, which other Reps considered unusual and pounced on him.
Chairs and all available objects were used to hit Ofongo.
However, the hefty Ofongo, who is about  6ft, 3 inches tall retaliated by throwing blows at the aggressors. His colleagues came to his aid and immediately shouts of No!No!! No!!! rent the air, followed with thunderous claps that further disrupted the meeting.
The whole House suddenly became rowdy as chants of ‘No, No’, ‘PDP’ and corresponding ‘Yes, Yes’, from supposedly members of the nPDP rent the air. The chants persisted for more than 30 minutes with members pacing about.
While some legislators went round the chamber chanting, some approached the seat of the Speaker in apparent cacophony of acceptance and disagreement.
Disruption in the House
Not even the shouts of ‘ Order, Honourable Colleagues!” and the banging of the gavel by the Speaker to arrest attention of members could calm frayed nerves. This went on until the Speaker started calling members by their first names, to settle down.
Chief Whip of the House, Rep Isiaka Bawa in a bid to restore order almost shouted  himself hoarse.
When order was eventually restored, the Speaker cleared the air, saying that the letter was not supposed to be read on the floor but in the PDP caucus meeting of the House.
Continuing, Tambuwal revealed that alongside Baraje’s request was also a letter from the  National Chairman of the Party, Alhaji Bamanga Tukur who he said had “also written to address the PDP Leadership in the House but only withdrew his letter this morning.”
He then upheld the visit of Baraje’s nPDP.
At about 3.45pm when Baraje stood up to deliver his speech, claps and shouts of Tukur! Tukur! rent the air, making it virtually impossible to hear his speech.
But immediately the Speaker, Tambuwal mounted the rostrum to deliver his speech, peace and order were restored.
As soon as he mentioned  “leaders of our great party”, the old PDP lawmakers took over again, but this time, the chant  was” PDP Goodluck! PDP Goodluck!!”
We musn’t treat democracy with levity – Tambuwal
Tambuwal, however, continued with his speech saying “the recent development in our country has exposed our vulnerability. All Nigerians fought to have this democracy and many died to get it restored, let us not treat democracy with levity.

“Therefore, we must not by our conducts treat this supreme price of our heroes past with levity. While acknowledging that political parties are vehicles through which we pursue our ambitions and aspirations, we must all conduct ourselves strictly within the confines of the Constitution of the Federal Republic of Nigeria and the law. I wish to caution also that Nigerians need a peaceful atmosphere to conduct their lives and business endeavours. I make bold to say that within the allowable era, we card-carrying members of political parties contribute not more than 25 per cent of the population of this great country.
“We must, therefore, abstain from heating up the polity unnecessarily. We must not take the rest of Nigerians for granted. We must not over-stretch our goodwill and we must not over-task the patience of Nigerians. Let us therefore make conscious efforts to allow national interest take the driving seat and not our personal ambitions.”
Leader of the House of Representatives, Mulikat Adeola-Akande, welcomed the visitors and hoped that their visit would help resolve the PDP squabble.
“We welcome our leader and his entourage to the House this afternoon on a courtesy call to the PDP caucus of the House of Representatives. It is our hope and prayer that your visit this afternoon will be the beginning of the end to the crisis in the party,” she said.
It’s unfortunate we allowed Baraje to come –Arusi
Reacting to what happened,  Arua Arusi, PDP, Abia (old PDP) said: “In fact, in the first place, it was very unfortunate to have allowed them to come, they shouldn’t have come at all. If they want to discuss with the party, they should have gotten in touch with the leader of the PDP not the Speaker. The Speaker is for everybody.
Old PDP members  not ready to listen to reason – Nwuke
Similarly, Ogbonna Nwuke (PDP, Etche/Omuma Federal Constituency, nPDP) said: “I think that what happened today has shown you the two sides of the PDP. The side of the PDP that is rational, reasonable and intellectually-based and the side of the PDP that is rowdy and uncontrollable.
“In a democracy, there is only one way forward: The fact that people are capable of expression, the fact that people are able to hear the grievances, the  fact that people are able to associate. Now, you saw that a handful of people came in here totally unprepared to listen to reason. If you say that you are a democrat, then you must behave in a manner that shows you understand the need to be democratic.
“Now, what we saw was a rowdy bunch, a group of people given to impunity. A group of people given to rowdy behaviour and a group of people who have nothing to present. So, today, the lines are drawn between the PDP that is rational and reasonable and the PDP that is irrational and noisy.
“Impunity has become the order of the day. Men who ought to guide our footsteps within the party have lost direction. The Speaker didn’t come here to speak either for the new or old PDP. What they wanted here was chaos but rational lawmakers, rational PDP members refused to be drawn into it.”
The meeting ended at precisely 4pm and Baraje in company of  Governors Rotimi Amaechi (Rivers), Sule Lamido (Jigawa), Rabiu Musa Kwankwaso (Kano), Ahmed Abdulfatah (Kwara), Aliyu Wamakko (Sokoto) and Aliyu Babangida (Niger)  filed out of the hall.
Ofongo after the  meeting told reporters that he raised a point of order “because I wanted to know why the meeting was summoned.”
Meanwhile, the nPDP members at a press briefing claimed they are now the authentic PDP and have over 108 members in their fold.
Chairman of the nPDP members, Rep Andrew Uchendu, who acknowledged that talks were on-going among the warring parties in the PDP, wondered why the pro-Tukur group couldn’t exemplify the spirit of tolerance and negotiation in line with the tenet of democracy.
He explained that when the crisis started, “most of our members were abroad and to our greatest consternation the situation degenerated to this level.”
Nigerians still uncared for — Tambuwal
Earlier in his opening speech to welcome members back, Tambuwal observed that the Nigerian populace was still uncared for by the government as most rural dwellers still grapple with poverty, poor health system, education and portable water.
He urged members to brace up for the days ahead and charged them to always be on the side of the people even though they would be hated in some quarters of the society.
“I have no doubt that we are returning more reinforced with constituency duties arising from the expectations of our constituents as well as the needs which we have become aware of through our observations, interactions and experiences.
“We should therefore be now guided more than ever before given that, the conditions of our rural dwellers has witnessed only marginal improvements. Most of our people still can’t afford to live decently. They still can’t afford quality education for their children or good healthcare for their families. They still don’t have those basic needs of life- from clean water to adequate security and regular power supply that other nations take for granted. This means there remains a whole lot more to be done.
Source: Vanguard

Politics Not A Do or Die Affair-Ambassador Fwa.