President Jonathan Replies El-Rufai, Says He Is Above Ethnic And Religious Politics 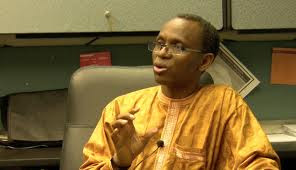 President Jonathan has responded to comments made by former Minister of FCT, Nasir El-Rufai, on Liberty Radio Kaduna over the weekend.
In statement signed by Reuben Abati, Special Adviser to the President on Media and Publicity, the statement read thus; “ My attention has been drawn to comments made by a former Minister of the Federal Capital Territory, FCT, and now chieftain of the All Progressives Congress, APC, Mallam Nasir El-Rufai, published in several newspapers where he made wild allegations against the person of President Goodluck Jonathan.  This most recent interview, like others he gave in the past only shows that El-Rufai is a serial liar and the facts of history bear me witness. El-Rufai accused President Goodluck Jonathan of playing ethnic and religious politics, however, any objective watcher of the President knows that this is untrue.”
Subscribe to our newsletter
Speaking further Abati said; “For instance, the Muslim Ummah just emerged from the Ramadan fast and the President, though a Christian, joined them in fasting and severally broke the fast with Muslims at the Presidential Villa. Also, in the history of the existence of Nigeria as a nation, no leader has spent the quantum of funds that President Jonathan has spent on education specifically tailored for Islamic itinerant scholars known as the almajiri. In the composition of his cabinet, the President has appointed Muslims into sensitive positions and ensured a balance that has been commended by many in the Islamic fold.”
Mocking El-Rufai in his statement, Abati said; “But it is most curious that this allegation is coming from Nasir El-Rufai, a man who profaned the name of Jesus Christ on Twitter by tweeting a joke which is too indecent to mention in the presence of civilized persons. This same El-Rufai is the same man who in June of last year claimed that Christians were behind the bombings of their own churches rather than terrorists and were doing this to further a Christian agenda. It is only a measure of his inconsistency that El-Rufai is today accusing the Presidency of being afraid of General Muhammadu Buhari whom the same El-Rufai said was “perpetually unelectable”. In fact, the accusation El-Rufai is now making against the President is precisely the same accusation he made against General Muhammadu Buhari on October 4 2010 when he said Buhari’s “insensitivity to Nigeria’s diversity and his parochial focus are already well-known”. Today, El-Rufai is serving this same Buhari.”
“That El-Rufai is not above lying to the media to achieve his political objective was proven in Segun Adeniyi’s book, ‘Power, Politics and Death’ when El-Rufai was quoted to have confessed in the presence of multiple witnesses who are still alive today that “There was no cabal, we created the myth to neutralise Turai”. El-Rufai sold Nigerians the dummy of a Turai cabal which was a lie used to further his own political ends.  In any case, we have a record of what El-Rufai truly thinks of President Jonathan from the leaked secret diplomatic memo from the U.S. embassy in Abuja which revealed that just before the April 2007 Presidential election El-Rufai had told the then U.S. ambassador to Nigeria that the then Vice Presidential candidate, Dr. Goodluck Jonathan, was “clean and honest”.”
Abati said; “Mallam El-Rufai’s comment on the Vice President is also unfortunate.  The report quoted him as describing the administration of Arc Mohammed Namadi Sambo in Kaduna state as a disaster, purporting that the vice president as a former governor of Kaduna state incurred a huge debt profile that compelled his successor to complain. At no time did the late Governor Yakowa ever accuse the Vice President of incurring any huge debt during his tenure as Governor of Kaduna State.   For the records, when the Vice President was in charge as Governor of Kaduna state, the state never borrowed a penny from any quarters. The efforts to generate cheap funds for development, which he applied for were just recently approved by the Islamic Development Bank for the state. It is on record also that the Vice President made judicious use of the state’s resources in reviving the already comatose railway sector, construction of a 150-million litres per day Zaria water treatment plant, the construction of a 300-bed specialist hospital and 5,000 kg grain silos  for each of the three senatorial districts, the building of a games centre at the Murtala Mohammed Square and the Ahmadu Bello Stadium in Kaduna; the construction of a brand new Governor’s office at the Sir Kashim Ibrahim  House; the establishment of a mobile and effective security outfit codenamed Operation Yaki and the deployment of 27% of the State’s budget to education amongst other achievements.”

“We are not the least surprised with such vituperations from Nasir El-Rufai. His public record of treachery and slander is still very fresh in the minds of Nigerians. His verbal assault on his original benefactors for worldly gain, his record of double standards and his treatment of the late Justice Bashir Sambo speak volumes of his character.  The false accounts he rendered in his recent collection of half-truths and outright lies which he accidentally titled The Accidental Public Servant further define his public image as an ungrateful, self-serving and loquacious personality.”

Buhari, El-Rufai Missing When We Fought For Democracy – Lamido