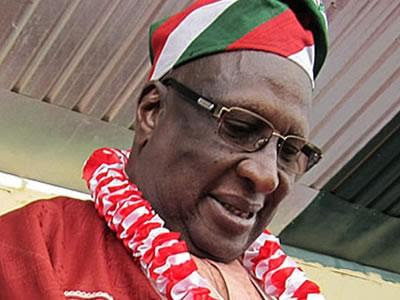 Subscribe to our newsletter
The Peoples Democratic Party governors are set to clash over the PDP National Chairman, Dr. Bamanga Tukur,  as the party’s National Executive Committee meets in Abuja  on Thursday.
It was gathered on Tuesday that  governors in the Jang faction of the Nigeria Governors’ Forum  were bent on ensuring that Tukur  retained his job. However, those  backing  the Rivers State Governor, Mr. Rotimi Amaechi,  as the NGF chairman,  our correspondents gathered, might  at the meeting  table alleged constitutional breaches by the PDP chairman as a prelude to getting him booted out of office.
A pro-Jang  governor, who confided in one of our correspondents  said   his  group would  resist any attempt to remove Tukur during the meeting.
He said, “We have told the President (Dr. Goodluck Jonathan)  that he should not listen to those   calling for Tukur’s removal. We know that the gameplan of some of our colleagues is to remove the man so that they can install their lackey as chairman.”
But a pro-Amaechi governor said, “There is no way we will hold a NEC meeting  and not raise the issue of constitutional violations against the chairman. We will pass a vote –of- no- confidence in the man and call for his resignation.”
In a telephone interview with one of our correspondents,   Adamawa State Governor Murtala Nyako,  insisted that Tukur should abide by the party’s constitution.
Nyako, who spoke through his Director of Press, Ahmad Sajo, said, “What we are saying is that he should run the party with justice, fairness and harmony. He should run the party  with equity. He should control the crises rocking the party.
“We are saying he should create a level playing field  for everybody in the party. If that had been created,  there would not be  crises in the party all over the country.”
When contacted, the Plateau State Commissioner for Information, Mr. Yijap Abraham said, “Governor Jang is a team player; he remains committed to playing the role that produces the greatest good for Plateau, the PDP and the nation.”
The PDP Interim National Publicity, Dr. Aderemi Akintoye, announced the NEC meeting  through a circular in Abuja on Tuesday.
The circular reads, “Emergency NEC meeting to hold Thursday, August 22  by 2pm. Members are advised to be punctual.”
It however  did not include the agenda of the meeting.
NEC membership includes the President, NWC officials, governors, state chairmen of the party and the Board of Trustees members.

The committee, at its last meeting in Abuja on June 20 had asked eight members of the NWC  to resign.They were  the Deputy National Chairman, Dr. Sam Jaja; the  National Organising Secretary, Abubakar Mustapha; the National Youth Leader, Mr. Garba Chima; the  Acting National Secretary, Mr. Solomon Onwe; the Woman Leader, Mrs. Kema Chikwe; the National Legal Adviser, Victor Kwom; the National Publicity Secretary, Mr. Olisa Metuh; and the National Treasurer, Bala Kaoje.
Apart from the eight national officers, 12 others , who were either deputies or ex-officio members,   also resigned.
Their resignations followed a  report by the Independent National Electoral Commission, which declared the way they emerged at the 2012 national convention, undemocratic.
NEC,  had at its last meeting, fixed the party’s mini-convention for July 21, 2013.
The Sunday PUNCH had exclusively reported on August 18 that  Jonathan and some of his close aides met  last week  over Tukur.
The PUNCH  had also reported on Monday that the national chairman had met with the President as part of efforts to retain his job.
Tukur  said on Monday that he was not under pressure to resign.
In an electronic mail, he said, “Let me reiterate  that I am not resigning and I have no intention of doing so as an elected National Chairman of the PDP.”
Besides, Tukur’s issue, it was gathered that NEC would, at the meeting  deliberate on the crises in the PDP  and assess the  reconciliatory efforts  of  its National Working Committee.
One of such crises is that of the  South -West. There is currently an    injunction  by  an Osogbo High Court stopping the special congress of the PDP  scheduled to hold in the zone this weekend.
The PDP NEC will also strategise on the upcoming governorship  election in Anambra and Ekiti states.
The party’s  stakeholders, including the President and the  governors, may also  review the political developments in the party with a view to positioning it for the 2015 general elections.
Other issue  that our correspondents learnt would be discussed is  the registration of the All Progressives Congress and the Peoples Democratic Movement.
Source: Punch