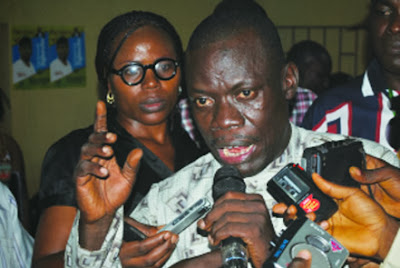 Subscribe to our newsletter
Peace is still elusive at the Nigerian Union of Journalists, Abuja Council as the war between the Council Chairman, Chucks Ehirim and the Correspondents Chapel over the suspension of its chairman, Tony Icheku has deepened.
It would be recalled that Ehirim was alleged to have unilaterally suspended Icheku over a press statement which was critical of Ehirim’s actions as Chairman of the Abuja Chapel.
Rising from its monthly congress on Saturday, The Abuja Correspondents Chapel urged its members to disregard the purported suspension of Mr. Icheku by Ehirim, Chairman of NUJ, Abuja Council as due process was not followed in the action nor constitutional process adhered to.
A press statement signed by Peter Inalegwu, Ag. Secretary, Correspondents Chapel, said the Congress which discussed the matter elaborately before arriving at a resolution further forbade Mr. Icheku from appearing before any committee set up to investigate him as Mr. Ehirim had ab initio prejudiced the outcome of the Committee before referring the matter to it.
Members of Congress who spoke averred that there is no constitutional provision for the Council chairman to suspend anybody and apparently acted in error rendering his pronouncement null and void.

‘’As journalists, we criticise others, by unilaterally suspending a fellow journalist does it imply that we do not have the right to criticise the goings-on in our own Union?’’, Mr Ben Okezie, a senior journalist and columnist with The SUN newspapers queried. ‘’We should resist this type of impunity,’’ he maintained.
Other members who supported his point of view maintained that in as much as the NUJ constitution has outlined due process in conducting union business, the 1999 Constitution which supersedes it further holds that a man is innocent until found guilty.
The congress held that by penalising the Chapel Chairman before referring him to the Ethics and Disciplinary Committee, Ehirim passed judgement before trial, a position Congress described as improper and untenable.
It will be recalled that Ehirim purportedly suspended Icheku for issuing a press statement critical of his administration
Congress which answered in the negative when the question was asked whether Council Chairman has powers to unilaterally suspend anybody unanimously adopted a motion moved and seconded by Messrs Jude Orji of Newswatch magazine and Godwin Ubido of the The Pointer Newspapers, urging members to disregard the purported suspension.
It further charged Mr. Ehirim to re-dedicate himself to the service of NUJ, Abuja Council.
Source: Dailyreveiwonline