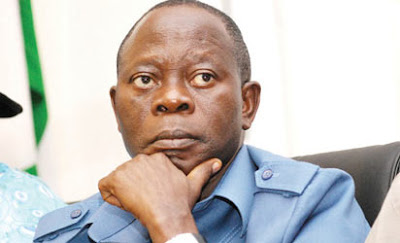 Edo State Governor, Adams Oshiomhole has warned that Nigerians may revolt against leaders soon than later if the government of the day will continue to show laissez-faire attitude towards the fight against corruption. The governor stated this during the weekend as a Guest Lecturer at the 2013 convocation ceremony of Benson Idahosa University Benin City, in a lecture which he titled: “Education and National Development”.
Subscribe to our newsletter
The Governor who was Represented by the Secretary to Edo State Government Edo State Government, Professor Julius Ihonvbere, Oshiomhole said that Nigerians spend over N80 billion annually on medical tourism and treatment overseas as he added;“just as we put our kids in foreign and African universities and this is with over N2 trillion lost to the fuel subsidy cartel, not to mention how much is lost annually to oil thieves”.
Oshiomhole said; “the list of imperfections, failures, problems and contradictions can go on and on. The important issue today is how we can relate these issues to the importance of education and therefore national development. Fleetingly, about people, it is, in the first instance, about cars, skyscrapers, money in the bank, huge bureaucracies and those things that may be symptoms of growth rather than development.
“Our idea of development revolves round interest and exchange rates, import-export ratios, GNP per capita, even GDP and foreign reserves. These may show that growth and maybe accumulation are occurring; they do not show that development that is people-focused, people-based and people-driven is occurring”.

Speaking further he said; “major companies like Unilever and Dunlop are closing down, setting up shop in Ghana and throwing thousands of families into unemployment, hunger and social pressures. I believe we should just leave the issue of power for another day after we fully understand what the GENCOS, DISCOS,and TRANCOS are doing.
“Until leadership in Nigeria changes from the arrogance of power, perpetual infighting, accommodating corruption and impunity and finding excuses for failure to meet popular expectations, I am afraid, most of our educational institutions, private and public, would never meet world standards.
“With an unstable, non-hegemonic and unreliable state, frequent policy changes, an economy in crisis, and leaders that use power and public funds for personal aggrandizement; the university must prepare to engage the negative forces in a changing global order and a reforming Nigeria.
“When education takes citizens in the opposite direction of these values then it becomes dangerous to societal development. Infact, an educational system that produces election riggers, intimidators, looters of the treasury, bad drivers, disregard for communal values, lazy public servants, kidnappers, inefficient and ineffective workers, political opportunists, thugs, and bad politicians that visit pain on the people and contaminate and undermine institutions of society cannot be regarded as positive education” said.

Obasanjo: Who Has the Moral Right? By Leonard Karshima Shilgba

Impeach Jonathan Before He Crashes Nigeria, APC To National Assembly