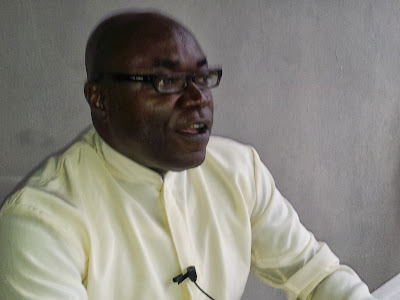 The Director of Church and Society of the Catholic Secretariat of Nigeria, Reverend Father Evaristus Bassey has warned that, Nigeria as a country should be considered as paramount and bigger than individuals seeking to be President by 2015 and called for a second thought on the continued over heating of the polity by the same politicians seeking to rule the country to the detriment of the unity and co-existence of Nigeria.
The Catholic Priest stated this in Calabar during a state of the nation briefing with the members of the press.
Subscribe to our newsletter
He said though the Constitution guarantee the President’s right to seek re-election, if the President had promised to have only one term with his party, he should be honorable enough to keep the agreement.
“President Jonathan as the father of the Nation should look deep within himself and answer at what cost he would pursue this ambition?
“It should not be at the expense of democracy whether internal party or popular democracy.

“Those who at both ends threaten the peace of this nation must realize that Nigeria is bigger than Jonathan ‘s quest for a second term and bigger than the North’s insistence to reclaim the Presidency.
“The ruling parties should not think that once someone emerges from them as flag bearers they will automatically win. There will be a show down in 2015”.
The clergy man also warned the opposition parties not to think that Nigerians will automatically revert to them.
He cautioned against corruption in the country and called on government and ASUU to resolve their impasse so that students can return to classes.
Source: Crossriverwatch