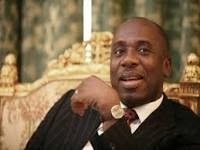 Rivers State Governor, Chibuike Amaechi has declared that failure of the People’s Democratic Party (PDP) led Federal government to implement the United Nations Environmental Protection Agency (UNEP) report on Ogoniland was part of the reasons why he left the party.
Subscribe to our newsletter
Amaechi spoke on Sunday at the thanksgiving celebration of former Council Chairman of Khana Local Government Area, Gregory Nwidam at St. Dominic’s Catholic Church, Bane.
Amaechi said the PDP led Federal Government lack the political will to implement the UNEP report to make the environment habitable for the people of Ogoni, including the provision of water and other infrastructural development.
“After the verification and recommendation by the Agency to the Federal Government, they have refused to release the sum of One million dollars for the clean-up and development of the area. As I am talking to you today, the Federal Government is doing nothing about the UNEP report. One million dollars is about 160 billion naira, but the Federal Government has been spending billions in other places. But, you need to ask yourselves one question, what did Ogoni do against the federal government that they cannot release 160 billion naira to save your environment. That is the reason I left PDP for APC, because, our interest is not protected in PDP.  So, when they cannot give the people of Ogoni 160 billion naira, which is not even enough for their kids to travel around America and London, if they cannot give to Ogoni people, why should you vote them?” he said.
“What you should do is to punish them with your votes by voting them out in 2015. When you vote, you are not fighting for me, you are fighting for yourselves because, I have served as a Speaker for 8 years and also Governor for 8 years, what I need from God is long life.  You need to fight for yourselves and save Rivers State as well,” Amaechi said.
The governor urged the people of Khana and all Rivers people to register and identify with the All Progressives Congress (APC) in order to vote out the Peoples Democratic Party, (PDP) in the 2015 general elections.
“Let me assure you that APC will win in 2015 in Rivers State. You owe me a duty to get registered with APC.  Go and register during the voters’ registration and get your voters card.  I want to thank the people of Bane community and Khana people for their support, especially the celebrant, Hon. Gregory Nwidam for his promise that the people of Khana LGA will ensure APC wins in Rivers State in 2015,” Amaechi said.

Amaechi also advised supporters of the APC in the State to resist any attempt by the PDP to use police and the military to intimidate and manipulate the 2015 elections against the will of the electorates.
“The PDP said they will bring Police and Army.  Let them bring them, but, you should know that they are also human beings. On that day of the election, I will be at the front. There is nothing police will shoot that I have not inhaled before. There is no cell that they have not locked me up as a student leader. There is no amount of slapping and beating I have not passed through in those days. There is nothing new that the Federal Government has not done to me.  So, I want to prepare you the APC for that day.  When you vote, seat down at the polling unit and let them count the votes and announce the results, so that they won’t rig us out.  Don’t vote for PDP.  For me, politics is not about my brother or my father, politics is about me and my interest. So, it is about you and your interest,” He said.
Amaechi noted that his administration has built link roads, Model Primary and Secondary Schools as well as Health Centres to improve Ogoni land and other ethnic groups in the State in contrast to the Federal Government.
He said, “What has Federal Government done for the people of Ogoni. If I have not done anything, I have built Roads, Primary and Secondary Schools as well as Health Centres in Ogoni land.  There are two areas I have focused since I became governor, Ogoni and Etche Local Government areas.  I have also taken development to other parts of the State.  In Ogoni, I started with rural road construction including agricultural investment to employ Ogoni people.  So, when former Senator Lee Maebe said, are Ogoni people monkeys? I asked him to go back to school.  This is because, the reason for establishing that farm in Tai LGA, even after we paid the owners of the land, was to create employment opportunities for the Ogoni people who work and get their daily living from that source. That farm is 2,000 hectares of land while the one we got from Etche was 5,000 hectares of land. This is a way of improving the living standard of the people in these areas. And, until I leave office, I will continue to drive development in the state.”
The governor said soon, he will address the people of the State on the on recent state of Federal allocations to the State.
“I will address the State in the next one week or more to tell them about the consistent shortfall of our allocations from the Federal Government. Even though the Federal Government said it is oil theft. We have lost almost half of our revenue. We don’t have enough money to run our government, and we need funds to be able to govern the state. But, let me assure you that we will continue to raise money to complete our projects,” Amaechi said.
Earlier, Hon. Gregory Bariledum Nwidam and the Senator representing Rivers South-East Senatorial District, Sen. Magnus Abe had promised Governor Amaechi, that the people of Bane Community and Khana Local Government Area were ready to massively vote for the All Progressives Congress in the 2015 general elections.
Press Unit
Government House, PH.
July 14, 2014