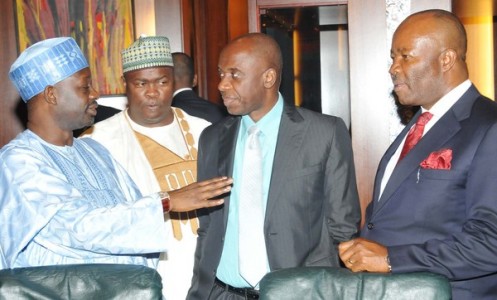 The Rivers State Governor, Chibuike Amaechi and his Akwa Ibom State counterpart, Godswill Akpabio again clashed at the Sunday night’s peace meeting, held at the Presidential Villa between President Goodluck Jonathan and the governors of the “New” Peoples Democratic Party, PDP.”
Mr Amaechi, who is the Chairman of the Nigeria Governors’ Forum, NGF, and Mr Akpabio, the Chairman of the PDP Governors Forum, were reportedly engaged in a shouting match, pouring invectives on each other.
Subscribe to our newsletter
They were said to have used unprintable words to describe each other at the parley held at the First Lady’s wing of the Presidential Villa, to seek ways of reconciling the New PDP and the Bamanga Tukur-led PDP.
Sources at the Sunday meeting said Messrs Amaechi and Akpabio clashed while the meeting was in progress.
A source told PREMIUM TIMES that during the discussion, the Rivers State governor, apparently angry, accused his Akwa Ibom State counterpart of corruption.
‘You’re a terribly corrupt man,” Mr Amaechi reportedly yelled at Mr Akpabio, in anger.
The governor of Akwa Ibom State was said to have responded by saying “What did I steal, how am I corrupt? You’re the one that is corrupt.”
However, calm soon returned to the meeting when Mr Jonathan prevailed on Mr Amaechi not to describe the Akwa Ibom governor with such words.
The truce induced by the president’s intervention was short-lived, as the South-South governors soon resumed their quarrel.
During the second phase of the clash, Mr Akpabio was said to have complained that members of his family were no longer safe in the country.
PREMIUM TIMES sources said the Akwa Ibom Governor specifically lamented that his daughter in one of the higher institutions in the north was being “bullied.”

In his response, Mr Amaechi was said to have told the Akwa Ibom Governor that his daughter was suffering that fate because the money he donated to the school, was stolen.
“They are bullying your daughter because the money you went there to donate is not yours, it was stolen money,” the Rivers State Governor reportedly told the Akwa Ibom state governor.
PREMIUM TIMES further gathered that during the altercation, apparently in response to a threat that officials of the Economic and Finance Commission, EFCC, would investigate him, the Rivers State governor was quoted as saying that he was not afraid of the Commission.
Mr Amaechi reportedly said that if the Commission’s officials were dispatched to Rivers State to investigate his administration, they would find nothing incriminating and that he would ask them to go to Akwa Ibom State where, according to him, the public treasury was being looted.
Both governors had last month clashed during a meeting with former President Olusegun Obasanjo to resolve the crisis that trailed the May 24 NGF’s election.
At the meeting with the former president, Mr Amaechi was said to have accused Mr Akpabio and some other governors of going behind their colleagues to tell Mr Jonathan different stories after any meeting, to show that they were not part of the discussion.
The meeting where both governors met were convened to reconcile the two factions of the PDP.
The ruling party split into two when, on August 31, seven governors elected on its platform, former Vice President Atiku Abubakar and its other chieftains, announced the birth of the “New PDP”.
The seven governors are Sule Lamido (Jigawa), Musa Kwankwaso (Kano), Murtala Nyako (Adamawa), Ailyu Wamakko (Sokoto), Abdulfatah Ahmed (Kwara), Babangida Aliyu (Niger) and Mr Amaechi.
The splinter group also named Kawu Baraje, a former acting National Chairman of the PDP and Olagunsoye Oyinlola, a former National Secretary of the party, as its national chairman and national secretary, respectively.
Source: Premium Times

Baraje’s PDP Sacks National Treasurer, Alhaji Tanko Isiaku Gwamna, For Being A Mole And A Saboteur