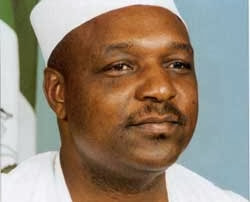 The Northern Taraba Elders Forum has accused the former governor of the state, Rev. Jolly Nyame, of working for the interest of the cabal around Governor Danbaba Suntai ahead of 2015.
Subscribe to our newsletter
The spokesman for the forum, Alhaji Bakari Bala, said this at a news conference in Jalingo on Thursday.
He alleged that Nyame had been romancing with members of the cabal, adding that the development left much to be desired in his capacity as an elder in the state.
“We see this romance as a deliberate move to mortgage the political fortunes of Northern Taraba to the South. It is, indeed, surprising to many of us, the elders from northern Taraba how Nyame has suddenly turned to be one of the apostles of Suntai knowing well that they have had series of running political battles over the years,’’ he said.

The forum also accused Nyame of being inconsistent as a leader, saying that it had noted his constant visits to Suntai at the Government House, Jalingo.
Nyame has however refuted the allegations.
“I want to make it abundantly clear that there is no doubt about it that Danbaba became a governor as a result of my contribution. As far as I am concerned, he is my political son.
“So, there is no way your son will be sick, whatever differences you have with him, there is just no way you cannot go and see how he is faring,” Nyame said.
Nyame said his reconciliation with Suntai was done on the basis of his Christian faith, noting that “my religion emphasises the need for forgiveness.”
NAN

Rivers Group Scolds Amaechi, Over His Comment That President Jonathan Is Only Developing Biafrans