‘Buhari Is Dealing With People Who Deceived Ribadu’ 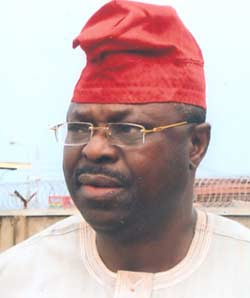 Following  the crisis rocking the Peoples Democratic Party, PDP, and the  emergence of  All Progressive Congress, APC, Tolagbe Animashaun,  a PDP senatorial aspirant  in Lagos Central District, in this interview,  explains how the PDP can resolve issues facing it.  Excerpts:
Five northern governors burying the PDP?
They can threaten hell and brimstone.  What we need to do is to sit down at the round table and settle issues like adults, because PDP is a very big party that will outlive  other parties; what is happening is expected of a party that is as massive as the PDP.
If you remember,  during the 2011 general elections, there were issues  that sounded as if they were not going to be solved but they were ironed out. I am positive that the PDP is going to survive the tumult  that is going on now because there have been re-conciliatory moves by all forces involved; that is the major reason the party is going to surmount the challenges.
Subscribe to our newsletter
Do you envisage the PDP making any head way in 2015?
There is absolutely no party like the PDP in Nigeria, one million parties can merge  and   endorsed by the court, but what you put into consideration first is the caliber of those coming together, you will realize that they are people bent on manipulation and dribbling of the masses.
I have a very high regard for the former head of state, Gen. Buhari, but, eventually, he will realize that he is dealing with deceitful people. If you also remember, in 2011, they deceived and used former chairman of Economic and Financial Crimes Commission, EFCC, Mallam Nuhu Ribadu, who was their presidential candidate, and dumped him. We are going to put our house in order and I  am sure we are having this storm in order to have a calm.
Is PDP democratic enough in selecting its key officers?
I am yet to see any political party  that is as transparent as the PDP in Nigeria.  Recently, we were supposed to have our convention  for the purpose of electing our national officers  but the court restrained us and we obeyed.  So, which other way can we be more democratic as compared to other political parties that just appoint families and friends.

How soon will PDP put their house together ?
Reconciliation is in process.  A committee has been set up to look into the matter.  The committee is headed by the Governor of Bayelsa State  Seriake Dickson.  I am sure all the parties involved in this crisis will come to the table to talk including the governors that are threatening to bury the PDP. You must realize that people talk when their horses are goaded, and it is better to be together than to be apart
Plans to impeaching  Gov. Rotimi Amaechi?
This party has made many people and I don’t see anybody biting the finger that feeds him, but that does not mean that nobody is hindered not to have aspirations, you can aspire to be the president or whatever you want to be but you ought to respect the authority of the president of the nation and also the authority of the party.
As far as I am concerned, there is some level of indiscipline on the part of the governor of Rivers State towards the authorities. Whatever grudges you may have can be sorted out within and not on the pages of newspapers. In all sincerity, he is a Nigerian and he has every right to nurse an ambition, but he has to put his ambition in check.
Chances of PDP winning any seat in South-west come 2015?
Currently the present administration has not been fair to us in the South-west and we have made representation to the government.  Lagos also does not have a representative in the Federal  Executive Council (FEC) and it is seriously affecting the fortunes of the party in the state because we don’t have a minister that will speak on our behalf  in Abuja.  The President   is aware of this and we have shouted on the roof top that  he is not being fair to us in the South-west.
It may interest you to know that Lagosians  are fed-up with multiple taxation in Lagos, bad roads and motor cycles being seized.  If the party can give us our own minister, we have a good  chance of winning Lagos for PDP in 2015. Also we believe that we were robbed in the last local government  elections by the Action Congress of Nigeria, especially in Eredo local government area of Badagry; Ikoyi – Obalende, Agbado – Okeodo  where we won the Chairmanship election and the courts gave the mandates  to the ACN.  So, all we need is to have the backing of our formidable party  in 2015.
For instance, the vote Mr. President garnered during last  presidential election was as a result of  the efforts of what the PDP did in Lagos. I believe we can do the same again if he recognizes that he needs our support to emerge in 2015.
Source: Vanguard