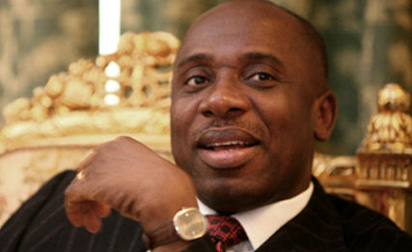 Subscribe to our newsletter
The Peoples Democratic Party (PDP) in Rivers State has been accused of promoting insecurity through encouragement of militants, devious acts in Rivers State as part of its desperation to make life uncomfortable for Governor Amaechi and people of Rivers State. The allegation was contained in a statement by the ruling All Progressives Congress (APC) to mark the first anniversary of the failed attempt by five renegade lawmakers to take over the leadership of the Rivers State House of Assembly.
“Needless to say, this failed coup by the unserious and misguided Hon. Evans Bipi and other funny characters like Hon. Michael Okechukwu Chinda, Hon. Victor Ihunwo, Hon. Michael Amaewhule and Hon. Kelechi Godspower Nwogu was aimed at carrying out the impossible task of impeaching Governor Chibuike Amaechi for defending the interests of the good people of Rivers State contrary to the wishes of their paymasters in Abuja,” APC said in a statement issued in Port Harcourt by the State Chairman, Dr. Davies Ibiamu Ikanya.
APC eulogised Hon. Chidi Llyod, the Majority Leader of the Rivers State House of Assembly, noting that “if not for his bravery and few others that stopped Hon Bipi and his group of renegade five the evil plots of these enemies of democracy to endanger our democracy by attempting the impeachment of Governor Amaechi might have been actualised.” It declared Hon. Chidi Llyod, Governor Amaechi and all those who played positive acts to stop these undemocratic elements heroes of democracy, saying that without their brave efforts in concert with loyal members of the State House of Assembly and other progressive elements in the State, PDP would have since murdered democracy in Rivers.
Reeling out the sins of PDP against Rivers, APC accused the renegade lawmakers of abandoning the work for which their constituencies sent them to the House of Assembly, even as it accused PDP of luring back militants in the state years after they were driven out by the Amaechi administration.
According to APC, “After failing in their bid to illegally unseat Governor Amaechi, these lawless lawmakers and their sponsors have not rested as they embark upon on one act of impunity after another to ensure that Rivers State, her people and government never know any peace. They have stopped representing their constituencies, thereby depriving their people due representation.
“Their sponsors through their agent PDP and other organs have ensured that Rivers State does not rest through false propaganda against the Rivers State Government and have even gone further to promote and lure back militants just to heighten insecurity in Rivers State with kidnappings, assassinations and harassment of political opponents as the order of the day.”

Rivers APC did not also spare President Goodluck Jonathan in the statement. “Not minding that Rivers State gave President Jonathan the highest number of votes during the 2011 presidential election, and the fact that he is an in-law to the state as his wife, Dame Patience Jonathan (Mama Peace), is from Rivers State, the promoters of the rebel lawmakers at the Presidency have ensured that no Federal Government presence is felt in Rivers State. These agents of darkness went the extreme mile of under-developing Rivers State and her people by ceding our oil wells to the President’s home state of Baylesa and other neighboring states of Abia and Akwa Ibom just to demonstrate their hatred for Rivers State and her people.”
According to APC, “For fighting for the rights of the people who elected him their Governor, Rt. Hon. Amaechi’s life is not spared as his constant harassment is now one of the major tasks of the Federal Government of Nigeria. Recently, the Governor was ambushed and refused entry into Ekiti State by military personnel acting on orders from above and his chartered aircraft confiscated. In Kano, the aviation authorities, acting at the behest of the Presidency, impounded the Rivers State Government-owned aircraft for no good reason, thus forcing Governor Amaechi and his delegation to make the long journey back to Port Harcourt by road.”
The party expressed joy that “despite all these setbacks, Governor Rotimi Chibuike Amaechi has proved himself an icon, hero and soldier of democracy. Some of the feats of this great leader of our time include making Port Harcourt the World Book Capital City, dogged fight for the oil wells and other rights of Rivers State and her people, as well as award-winning achievements in Education, Agriculture, Health, etc.”
APC said that “even if President Jonathan and his confused cohorts do not recognize the great feats of Governor Amaechi, the rest of world does, the latest proof being his recent decoration as an Associate Fellow of the United Nations Institute for Training & Research (UNITAR), Geneva, Switzerland.”
The party urged Governor Amaechi, Hon. Llyod and other genuine democratic forces in Rivers State not to be intimidated, assuring them that both APC and the entire people of Rivers State are solidly behind them.
Long Life APC!
Long Life Rivers State!!
Chief Eze Chukwuemeka Eze,
SSA Media and Public Affairs to the State Chairman, APC Rivers State
14-07-14