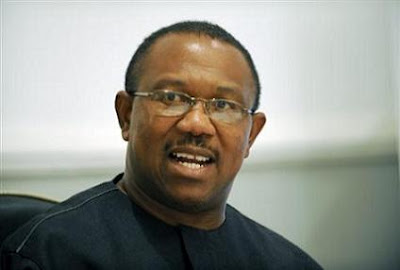 The All Progressives Congress (APC) has described as a very dangerous game that could threaten the nation’s unity the decision by Gov. Peter Obi to sensationalize the recent home return of 14 (not 72 as widely claimed) Anambra indigenes from Lagos.
In a statement issued in Lagos on Sunday by its interim National Publicity Secretary, Alhaji Lai Mohammed, the party said instead of reaching out to his Lagos counterpart, as he has done on less important issues in the past, Gov. Obi fired an over-dramatized letter to the Presidency and leaked such to the media, thus setting off an avoidable friction between the Igbo and the Yoruba that will not augur well for Nigeria’s unity.
Subscribe to our newsletter
It said indications are that Gov. Obi’s resort to a media campaign, which has triggered a vicious Lagos State/Yoruba bashing, is aimed at gaining an undue advantage ahead of the forthcoming Anambra governorship election, instead of being borne out of sheer altruism
”We are not saying Gov. Obi has no right to play politics, but he must fight clean and avoid any action that could hurt not just the enduring harmony between the Igbo and the Yoruba, but also the unity of the country.
”Resorting to primordial sentiments anytime election is approaching is Gov. Obi’s modus operandi. He did it just before the 2009 election, when he labelled the ACN under which Dr. Chris Ngige contested as a Yoruba party, and he is going down the same path now. This is all about the November 2013 election. If Gov. Obi is sure of his performance, he should allow that to speak for him and stop whipping up tribal sentiments.
”It is very dishonourable for a political leader at the level of Gov. Peter Obi to show total disregard for the truth and to whip up emotions for personal gains, as he has done on this issue. By his deliberate and blatant distortion of facts, as we will show shortly, Gov. Obi has raised a serious doubt about his leadership qualities.
”Equally guilty of indiscretion at best and deliberate peddling of falsehood at worst are the various ‘analysts’, ‘commentators’, out-of-luck NGOs and organizations that have jumped onto the bandwagon of Lagos bashing over the issue, mischievously tagged ‘deportation’ instead of what it is (home return for proper integration), when they could have sought the truth from the Lagos State Government.
”Even some of the respectable Igbo socio-political organizations failed the simple test of fairness by not unearthing the truth before making pronouncements. Even if they do not trust the Lagos State Government, they could have at least inquired about what happened from their son, who is a ranking member of the cabinet of Lagos State,” APC said.
The party said Gov. Obi and his fellow travellers forgot that those who live in a glass house do not throw stones, hence they resorted to sensationalism and downright lies, first on the process leading to the home return, and then on the number of those involved and finally on the motive behind it.
”All those who consider the home return of 14 Anambra indigenes as a reflection of the Lagos State Government’s (and by extension the Yoruba’s) ill will toward the Igbo should consider the following facts:

1. There was an exchange of correspondence dated 9th, 15th and 29th April 2013 between the Lagos State Government and Anambra State Government, through its Liaison Office in Lagos, about the ‘integration’ not ‘deportation’ of the 14 people.
2. Anambra State Government did not respond to requests by Lagos State to come and validate/identify the people who claimed to have come from Anambra. Had it done so, this issue could have been better managed.
3. Lagos State itself received notice from the Government of Akwa Ibom to come, identify and pick up two Lagos indigenes whom they picked up in a ‘lunatic clean up’ exercise in Uyo. Lagos responded promptly without making any noise about it.
4. In Dec. 2011, the same Anambra State Government that is now crying foul over the home return of Anambra indigenes arrested and repatriated 29 beggars to their home states in Ebonyi, another Igbo State, and Akwa Ibom. Then it was conveniently not ‘deportation’ but ‘repatriation’ and no tribal meanings were read to such action. This information can be accessed here: https://leadership.ng/nga/articles/9600/2011/12/04/anambra_orders_arrest_child_beggars.html
5. Also in 2011, Abia State Government sacked 3,000 non-indigenes (but fellow Igbo) from her work force and asked them to go back to their respective states, yet not even a whimper was heard from all those who are now raising hell over the ”deportation” of 14 Anambra indigenes from Lagos.
”If Gov. Obi’s logic is to be followed, then the government of Akwa Ibom, and the entire people of the state, harbour bad intentions toward Lagos state and the Yoruba by asking Lagos State to come and pick up two ‘vagrant psychotics’ identified as Lagosians who have been rehabilitated.
”Suffice it to say that these home returns have been going on for a long time among states, even within the same ethnic groups (as we pointed out above), and has never before elicited the kind of jaundiced interpretation that has been given to the return of 14 Anambra indigenes,” it said.
APC said it is also important to point out that this home returns are not limited to Nigeria. The US State of Hawaii has recently offered one-way tickets to homeless persons to return to their home states within the US, as part of the State’s efforts to take the burden off its welfare system. It is estimated that Hawaii’s ”return-to-home” programme will affect its 17,000 homeless residents. This information can be accessed here:
https://www.dailymail.co.uk/news/article-2381732/Hawaii-sets-aside-100-000-offer-17-000-homeless-people-way-airfare-home-states.html
In the light of the above, the party asked Gov. Obi to apologize to the people of Nigeria for engaging in a blatant distortion of facts, making himself an agent of destabilization and sensationalizing what is not more than a routine issue, all because he wants to give a certain political party a bad name just to hang it, while at  the same time feathering his own nest ahead of his state’s governorship election